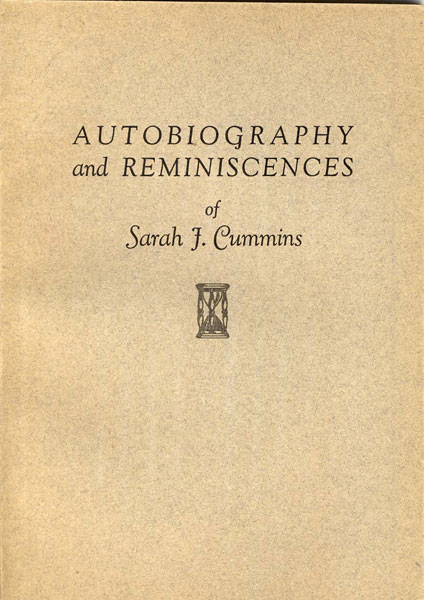 Other works by SARAH J. CUMMINS

First edition. 8" x 5.5" printed wheat wrappers. 61 pp., illustrated, portrait. Four printings of this excellent overland were issued 1914, but with different impressions. Eberstadt 114:269 says, "The narrative of one who braved the hardships and endured the sufferings incident to life in the unexplored regions of the Willamette, and crossed the plains to the Oregon Country in 1845. The author went part of the way with Fremont, met Whitman in the Sioux Country, gives an account of the Yellowstone region in 1845, and much other out-of-the-way materials." Mintz, The Trail 114 says, "This is a somewhat impetuous but enthralling account of the near-demise of Sarah when she was a teenage bride crossing the plains. She speaks of Fremont traveling with them for a short time, being saved from hostile Indians in Sioux country, and adds a bit about the Yellowstone area.” Soliday I:365 says, "Much out-of-the-way material of the overland as seen through a woman’s eyes. The party drove one hundred head of cattle with them on their trek from St. Joseph, Missouri, to the Oregon country in 1845. When they reached the Cascades, they divided into two parties, since it would have been impossible to take so large a herd down the river. Sarah insisted on accompanying her new husband over the Cascades with the herd rather than going in the boats with the other women. The cattle herd strayed during a blizzard near Mount Hood, and petite eighty-pound Sarah almost froze."

Description Of The Town Of Lawrence, Van Buren …
The Lawrence Coal Company

Useful And Practical Hints For The Settler On …
SPENCE, THOMAS [CLERK OF THE LEGISLATIVE ASSEMBLY OF MANITOBA]