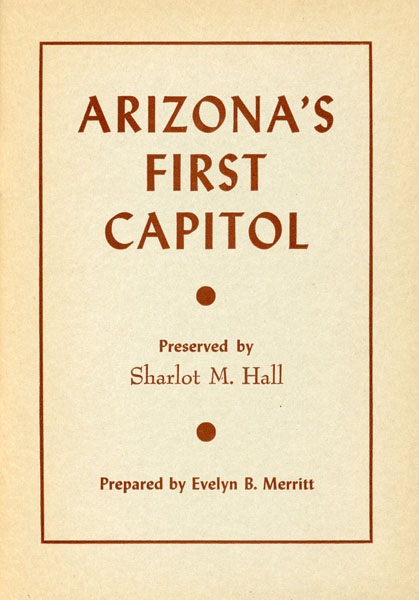 MERRITT, EVELYN B. [PREPARED BY]

Other works by MERRITT, EVELYN B.

Later printing. 6" x 4 1/4" printed wrappers, n. p. [16 pp.], illustrated from photographs. Sharlot Hall was an American journalist, poet, and historian. She was the first woman to hold an office in the Arizona Territorial government. Following the death of her father in 1925, Hall acquired the cabin which had served as the 'Governor's Mansion' for Arizona Territory's first governors. In addition to her living quarters, she used the building to house her collection of artifacts related to Arizona pioneers and pre-historic Yavapai county. This move was followed, in 1928, with her founding of the Prescott Historical Society. The same year she opened what she called the Old Governor's Mansion Museum, now known as the Sharlot Hall Museum." Fine, bright copy.

Mrs. Earp, The Wives And Lovers Of The …
SHERRY MONAHAN