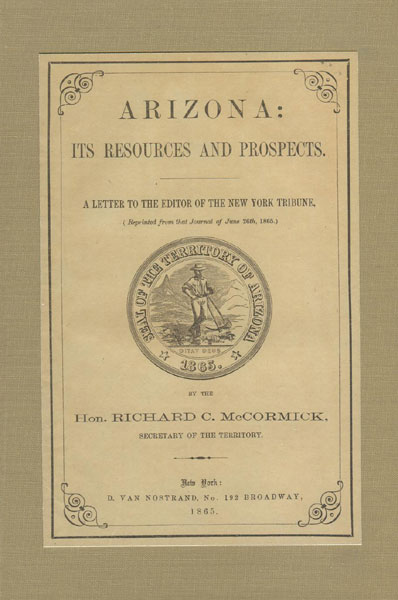 Arizona: Its Resources And Prospects. A Letter To The Editor Of The New York Tribune, (Reprinted From That Journal Of June 26th, 1865)

Other works by RICHARD C. MCCORMICK

First edition. 8vo. Original printed wrappers, 22 pp., folding map. In this early promotional pamphlet, McCormick tells of the resources and prospects of the newly created Territory and gives descriptions of the then four counties -- Pima, Yuma, Yavapai and Mojave. In the letter, dated June 1, 1865, and published on the 26th of the month, Hon. Richard C. McCormick, then secretary of the Territory of Arizona, says: "A portion of the Gila Valley is occupied by two tribes of Indians noted for their good traits, the Pimas and Maricopas. The lands cultivated extend from 16 to 20 miles along the river, centering at the Pimas villages. Irrigating canals conduct the water of the Gila over all the district. The Indians raise wheat, corn, millet, beans, pumpkins, and melons in great abundance. They also raise a superior quality of cotton, from which they spin and weave their own garments. There is a steam grist mill at the Pima villages, and a large quantity of excellent flour is annually made. I have no doubt that the Gila bottoms alone afford arable land sufficient to raise food for a densely populated State." Herd 1381 says "Rare." Light chipping to edges of front panel, else very good, housed in a four-point folding case with front panel of pamphlet duplicated on the front cover.

Pioneering In Southwest Texas. True Stories Of Early …
GRAY, FRANK S. [EDITED AND WITH A FOREWORD BY J. MARVIN HUNTER]

Letter From The Secretary Of The Interior, Recommending …
J. P USHER