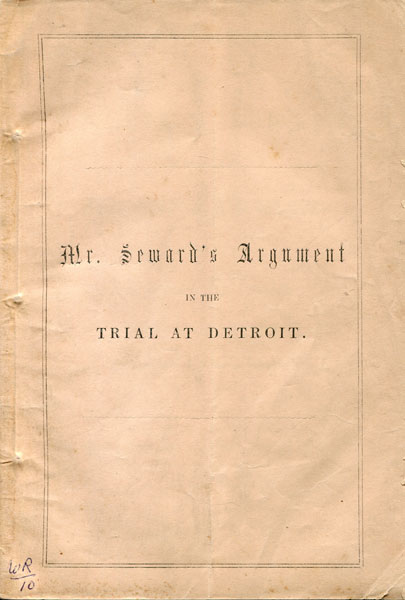 Argument Of William H. Seward, In Defence Of Abel F. Fitch And Others, Under An Indictment For Arson, Delivered At Detroit, On The 12th, 13th And 15th Days Of September, 1851

Other works by WILLIAM H. SEWARD

First edition. 8vo. Original printed wrappers, 68 pp. This is the full text of Seward's compelling closing argument in defense of a group of men charged with burning down the Michigan Central Railroad's freight depot in Detroit. The accused men were angry about property damage and loss of income resulting from the construction of the railroad across their land. The trial received considerable publicity and evoked strong opinions on both sides, with many believing the men were being "railroaded" because of their anti-Railroad activism (and that no arson had actually occurred). Despite Seward's impassioned defense and demonstration that the Railroad's witnesses were highly unreliable, twelve of the men were convicted and sentenced to hard labor. Abel Fitch, who was accused of being the ringleader, died of dysentery contracted in jail before the trial was over. Small inked letters at foot of front cover, minor wear to the foot of spine, faint vertical crease, light chips and nicks to fore-edges, and a short closed tear to bottom edge of rear cover. Internally clean and sound and a very good copy.