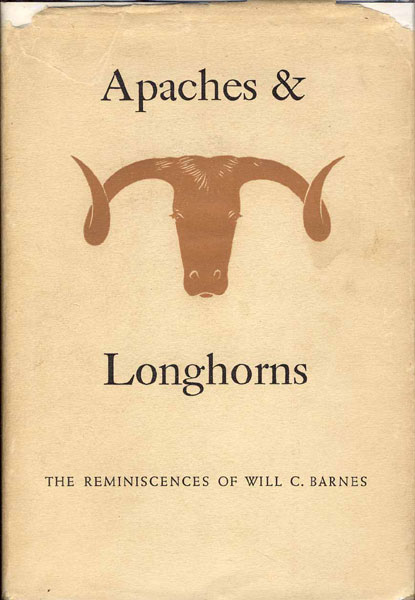 Apaches & Longhorns: The Reminiscences Of Will C. Barnes

by Will C. Barnes

First edition. 8vo, Decorated tan cloth with titles and decoration printed in black and brown on the front cover and spine, xxiii [blank], 210 pp., frontispiece [portrait of Will Croft Barnes], introduction, illustrated from photographs, plates, portraits. Edited and with an Introduction by Frank C. Lockwood. Barnes arrived in Arizona in 1880 in the Army Signal Corps, won Congressional Medal of Honor in Apaches Wars, became cowboy & rancher and was in the thick of the Territory's struggles with outlaws and problems between cattlemen & sheepmen. Six Guns 142 says "An interesting book containing accounts of the Tonto Basin War and the killing of Andy Cooper by Commodore Perry Owens." Graff 189 says "A grand book of Arizona experiences." Very good in price-clipped dust jacket with chips to the spine ends, corners, and extremities.

Message From The President Of The United States, …
by Chester A. Arthur

My Fifty Years In Rodeo. Living With Cowboys, …
by Foghorn Clancy