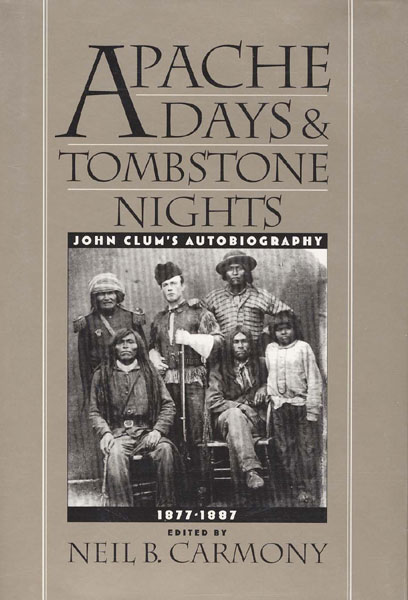 by Neil B. (Edited By) Carmony

First edition. 8vo. Signed by the author. Cloth, decorated end-papers, frontis, 185 (1)pp., intro., num. illus., maps, epilogue, notes and citations, sources and references, index. Memoirs of Clum's life in Arizona Territory from 1877 to 1887. He gives his personal views on the Apache wars, the "Gunfight at the O.K. Corral," and the fascinating people who fought these battles. Clum was agent for the San Carlos Apache Reservation from 1874 to 1877, and he and his reservation police were the only force to ever capture Geronimo at gunpoint. In 1880, he founded the Tombstone Epitaph newspaper, and the next year he was elected mayor of Tombstone. As mayor he supported Wyatt, Morgan, and Virgil Earp (his chief of police) in the struggle with the Clantons and their associates. The manuscript was written in 1932, shortly before his death. It is now housed in the Special Collection Department of the University of Arizona Library in Tucson. The editor has supplemented Clum's autobiography with an introduction and epilogue, maps, photographs, and related writings in which Clum describes his adventures as Indian Agent. Very fine in dust jacket. Limited to 500 hardcover copies in dust jacket and out-of-print.

Echoes Break The Silence. A Collection Of Articles …
by Ernestine Chesser. Williams

Day Of The Moon
by William Jeffrey

A Virginian In New Mexico.
by John Rowzee Peyton

The Hanging Of Bad Jack Slade
by Dabney Otis Collins