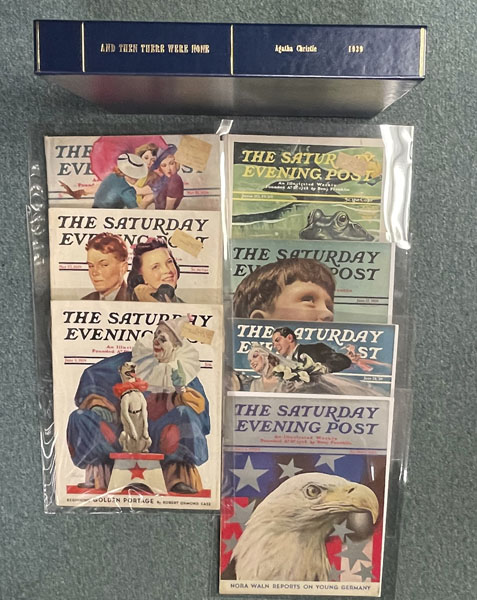 And Then There Were None - Complete Seven Part Serial Appearing In The Saturday Evening Post, May 20 - July 1, 1939

Other works by AGATHA CHRISTIE

First edition. Seven 4to magazine issues in color, pictorial, stapled wrappers, 116 - 112 - 92 - 128 - 108 - 104 - 88 pp., with color and black & white illustrations throughout by Henry Raleigh. Four issues with contemporary address labels, first five issues with modest wear and handling, scattered foxing, tiny tears and attendant creases, and the occasional stain or splash mark; May 20 issue with some more pronounced wear along the edge of the rear wrapper, with a shallow tide-mark to several terminal leaves; Very Good. June 24 and July 1 issues about Near Fine, without labels. First appearance in any format of one of the best of Christie's novels, counted among her favorites in her autobiography. "Ten men and women are lured to a solitary house built by an eccentric millionaire on a tiny island off the coast of Devon which is inaccessible except in calm weather. In each bedroom, over the fireplace, hangs a framed copy of the nursery rhyme. One by one, each of the ten guests dies in a way related to the relevant couplet in the nursery rhyme...In the end, as intended, there is no one left. The solution for the baffled reader lies in an epilogue to which the murderer appends a signature. The novel ends with the words, 'When the sea goes down, there will come from the mainland boats and men. And they will find ten dead bodies and an unsolved problem on Indian Island'" (Wagstaff & Poole, p.160). Basis for no fewer than three films, the best of these being René Clair's 1945 adaptation starring Barry Fitzgerald, Walter Huston, and Louis Hayward. First appearance in any form of a story that the author counted among her favorites and housed in a leatherette clamshell case with titles stamped in gilt on the spine.

The D. A. Draws A Circle
ERLE STANLEY GARDNER