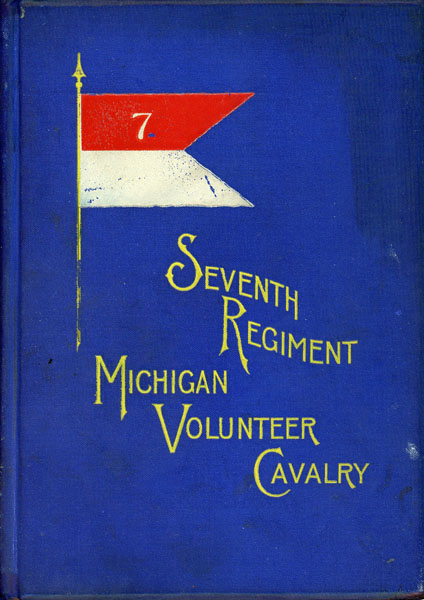 An Historical Sketch Of The Seventh Regiment Michigan Volunteer Cavalry, From Its Organization, In 1862, To Its Muster Out, In 1865

Other works by ISHAM, ASA B.

First edition. 8vo. Original blue cloth with titles in gilt on the front cover and spine, and Regiment banner design on the front cover, dark brown front and rear endpapers, 118 pp., frontispiece (portrait of Colonel W. D. Mann, 1893), preface, illustrated from photographs, portraits, officers' register. O'Keefe 1207 says: "A regimental account that covers the third day at Gettysburg, where the Michigan Cavalry led by General Custer fought off General J. E. B. Stuart and his Confederate Cavalry, who were attempting to attack the rear of the Union line. The author served in F Company of the Seventh Regiment and was the regiment historian." Much information is provided on the officers of the regiment and their comments regarding battles and skirmishes. Signed twice in pencil on the front free fly leaf: "Compliments of Col. W. D. Mann. Mann was the colonel of the regiment and there is a photograph of him as the frontispiece. Also signed by William Covert, who was a member of Company H, 7th Michigan Cavalry, and served in the regiment from Aug. 15, 1864 to July 18, 1865. Near fine, bright copy of a very scarce book that is difficult to find, especially in such nice condition.