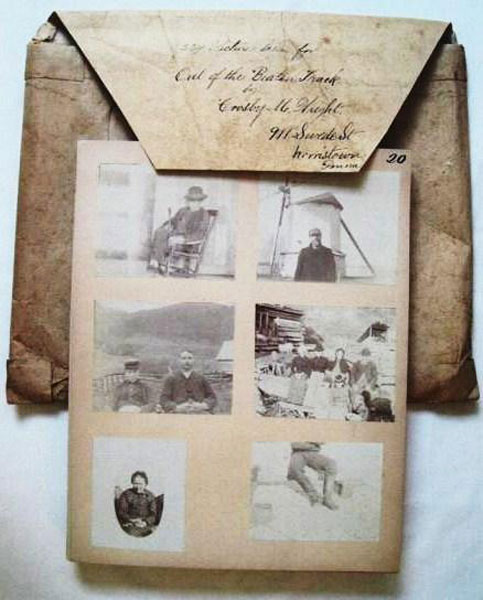 An Archive Of 237 Albumen Photographs Taken By Crosby M. Wright To Document His Circa 1890 Voyages By Sailboat And Peregrinations On Foot, Along The New Jersey Coast And Up The Hudson River

Intended to document his unpublished (and unknown) manuscript, "Out of the Beaten Track." Norristown, PA, circa 1890. The 237 finely executed albumen photographs (each measuring about 3 by 4 inches) are neatly mounted on rectos of 37 large quarto leaves (very heavy stock boards, measuring 14 by 11 inches). The 37 leaves are housed in two custom paper chemises, each titled in Crosby M. Wright’s neat ink holograph: “234 [237] Pictures Taken for OUT OF THE BEATEN TRACK by Crosby M. Wright....” Included are: views of the Monmouth Beach Lifesaving Station and crew; fishing fleets; a captured white whale; ice harvesting; an offshore shipwreck; drying fish; spinning and weaving; views of the Jersey Shore and Atlantic City lighthouses; windmills; canal locks; local characters and children; numerous views of the New Jersey coast; etc. Moving up the Hudson River: Depicted in one photograph is a man in snowshoes. Several images include Dutch houses (based on roof lines) and Dutch barns. Images of two or more windmills might suggest Staten Island or somewhere up the Hudson River. The long wooden bridge in one view might be across the Hudson. Several canal locks and barges are shown (Delaware and Raritan Canal? Morris Canal?). Several views show low falls in a river, possibly the Delaware River, a bit above Trenton. The ice-harvesting images could be from New Jersey or Pennsylvania side of the Delaware River. Views of people living in cabins reflect the 1890's era of life along waterways in the eastern states The photographer, Crosby Morton Wright, was a wealthy amateur. He was born January 12, 1847 to Ellen E. and William M. Wright. In the 1867-68 Philadelphia Directory, Crosby is listed as a plumber living at 509 S. 9th Street. By 1880, the city directory lists Crosby M. Wright as living at 1419 Arch Street, without an occupation. In the 1892 city directory, Crosby is again listed as living at 1419 Arch Street with no occupation. In the 1880s and 1890s the family also appears in Philadelphia’s Blue Book. Crosby’s father dies between 1892 and 1893 when his mother Ellen is listed in the directory as the widow of William and living with Crosby M. at 1419 Arch Street. By 1910, Crosby has married Fanny D, a woman 22 years his junior, and has a daughter. He lives at 2405 Bryn Mawr Avenue in Philadelphia with his family, a cook, a gardener, and a housekeeper. Under "occupation," the census-taker wrote “own income.” No occupation is listed for Crosby in the 1920 census. He died on August 11th of that year, and is buried at Westminster Cemetery, Bala Cynwyd. On the whole, the 237 photographs, mounted on 37 numbered boards, are in excellent condition, with sharp focus and good contrast. Although a few photos have faded over time, most of them represent an impressive production by a skilled 19th-century photographer and adventurer. Very good copies.

Trails Of Yesterday.
by John. Bratt

Tucson From Pithouse To Skyscraper
by Dr. Emil Walter And Isabel Fathauer (Compiled By) Haury