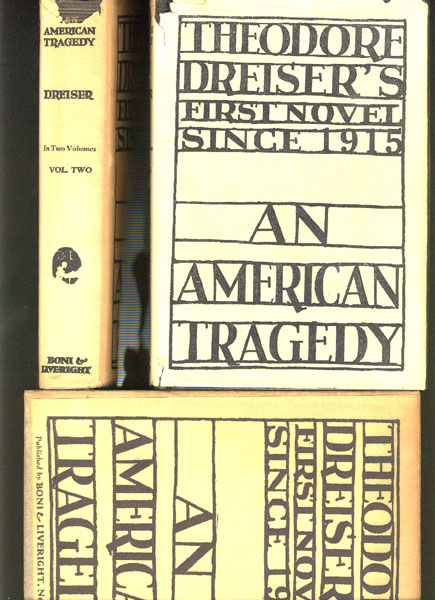 Other works by THEODORE DREISER

First edition. Fine copies in two very good dust jackets with some light chipping to the edges, corners, and spine ends primarily at the top of the spine with the loss of the word "An" in volume two, and some loss to the upper left hand corner of the rear panel of volume one. Housed in a near fine publisher's slipcase with one seam professionally repaired. One of the best examples of the very fragile publisher's slipcase that we have ever seen. Encyclopedia of Mystery & Detection, page 130 says, "His major contribution to the crime genre is AN AMERICAN TRAGEDY (1925), a realistic study based on the real-life murder of Grace Brown at Big Moose Lake in the Adirondacks by Chester Gillette in 1906. Clyde Griffiths, the protagonist, seduces a factory worker but wants to marry Sondra Finchley, a wealthy member of the town's aristocracy. When the factory girl tells him that she is pregnant and expects him to marry her, the social-climbing Griffiths fears that his relationship with Sondra will end; he plans to murder the girl. He takes her rowing but lacks the courage to implement his plan; ironically, she is drowned accidentally. He is arrested, tried, and convicted of murder. Somehow, Dreiser believed that he had written an indictment of American capitalism." In 1951, the story was made into the Paramount movie film A PLACE IN THE SUN, directed by George Stevens and starred Montgomery Clift, Elizabeth Taylor, Shelley Winters, Anne Revere, Raymond Burr, and others. A Haycraft/Queen Cornerstone.

The Mask Of Dimitrios
ERIC AMBLER