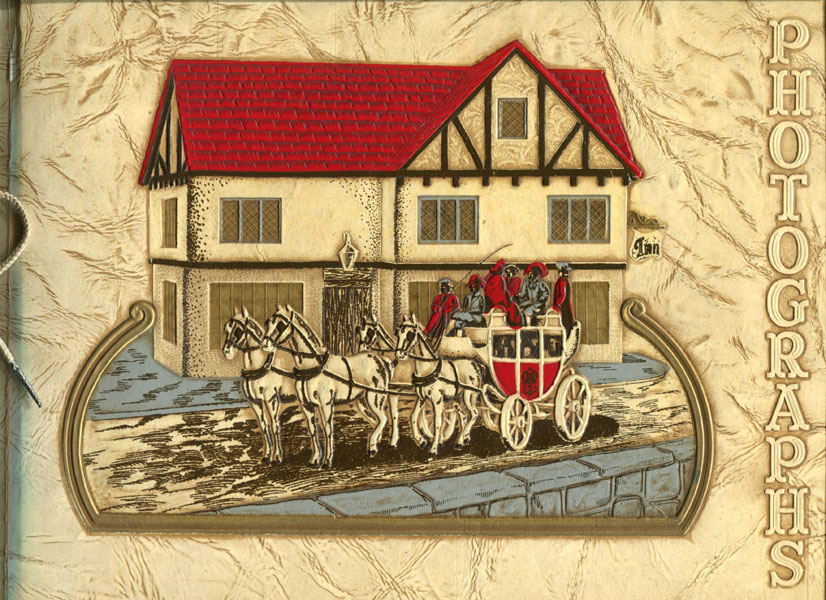 An American Marine's Photograph Album Documenting His Duty In The South Pacific During World War Ii, Plus Loose Photographs Of Guadalcanal And Germany During The Same Time Period

Other works by SHALLOW, LIEUTENANT JOHN

First edition. Original photograph album. Oblong 10 1/2" x 13 3/8" padded and string-tied faux leather with a color decoration of an inn and horse and carriage of the front cover. 133 total photographs, the album contains 59 original images (mostly 3 1/4" x 4 1/2," some 3" x 3," and one 8" x 10." Each photograph is fitted into red-white-blue photograph corners on 10" x 12" black paper stock. The compiler refers to himself as "Jack" or "Jackie," and he is pictured with wife Madge and small son “Little Billy”, and his father “Big Jack”. He traveled to the WWII Pacific theatre on the “USS Canberra”, the only US warship named for a foreign city. The “Canberra” entered service in 1943 and was later torpedoed in the Aerial Battle of Taiwan-Okinawa in 1944 and returned to the US for repairs. Jack was probably at Guadalcanal just after the Campaign ended (Feb. 3, 1943), when it became a major base for the Allies. ~~ Jack identifies his fellow combatants by their full names and often branches of service and ranks: Walter Grondell, USS Canberra, 1943; Dom Mastone, USNCB “Sea Bees”, 1943; Sgt. Donald Redding, 1942; Corporal Russell Landless (with woman “Jerry” “on active duty in Greenland”); Lt. Bob Lambourne (with Evelyn and at graduation from Officers Training, 1943), Oregon, 1943, and also as Private Bob Lambourne (“on maneuvers, 1943”—7 shots); “Corporal David J. Allan, 5th Marines, Battle of Guadalcanal”; Lt. Roger Lindsey, Army Air Corps; Lt. Albert Lindsey USNR; Sgt. Robert Lindsey, USMC; Ensign Leo Doherty, USNR; Bill Fallon, USMC; George Assan, Jr., Seabees; “Charles Allan, USNR; and Barton Allan, USN. ~~ Two pages of photographs (9 images) are labeled “Official Marine pictures—Scenes of Guadalcanal”, including shots of the marines landing on the beach, Henderson Field, “Bomber at Henderson Field”, “Dead Jap”, marine rifles (“They forget Marines are crack shots”), a foxhole, “bridge built over swamp” and a dead soldier (“The End”). There are also several unlabeled but presumably Guadalcanal snapshots—a soldier saluting in front of barracks, two US sailors with a Japanese flag, and three US servicemen in the jungle. Other men-at-war photographs include seven of "Private Bob Lambourne on Maneuvers, 1943”, showing him in a tent, at attention with other men, “at ease” with other men, the barracks, etc. ~~ Included in this archive is an envelope of 74 loose photographs of Guadalcanal and Germany during World War II. Some labeled on versos in various hands. The b&w images vary in size. Fourteen photographs show our compiler, John Shallow, in training at Fort Ontario in 1943. There are also 11 shots of identified soldiers not labeled “Fort Ontario”, including 2 of Harold, Audrey, and Co. (taken at parks in Brooklyn); a photo labeled “John” taken at Ft. Dix, NJ in November, 1942; an MP, who inscribed his photo “To my pal John Shallow from Jim Woerner"; two shots of duos: “S/Sgt Lester Paccaci and PFC Crowlenski” and “PFC Herbert Baily & Corwlenski”; unidentified man in jeep at Fort Custer, MI, Aug., 1943; four men in helmets with “Dupe/ Not for publication” NS Army Censor/ Harnsberger, 1st Lt. PA” on verso; three men, including Shallow, April 1943, in “Mom Giamquitta's" back yard, inscribed by her to Shallow on the verso, April 1943; Cpl. Dan Miles, June, 1944; and Roy Funk of Utica, in Monticello, Arkansas April, 1943. Also present are 34 photographs of unidentified U.S. servicemen: 21 of various men; 10 with mothers or girlfriends/wives; two men with dog; and one man with child in front of a demolished building. There are also four photographs from Guadalcanal: three of “natives”—“Friendly little fellows” in a large group wearing shorts or sarongs; “Some of the native women…all 5 are my girl friends. Not bad, hum!”, showing five bare-breasted women in skirts; and one photo of a small/ naked child, “What do you think of little Jas.(?), 6 years old” holding “some kind of melon. One photograph shows a soldier with a rifle in the jungle. Finally, there are nine small (2 ½” x 3 ¼”) photographs apparently taken in Germany: three of airplanes (one ruined plane with swastika); five of buildings (2 ruined, one of which has a horse and carriage in the foreground); one of a soldier in front of German P.O. building; and a photograph of a plane in the sky.