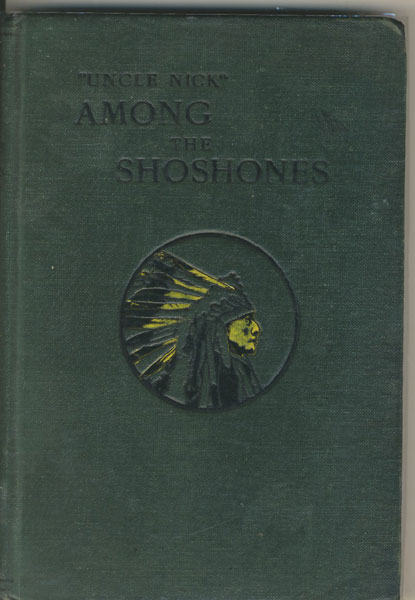 Other works by WILSON, ELIJAH NICHOLAS .

First edition. First issue. 8vo. Presentation inscription by the publisher and signed by him. The signature of the publisher is rare, as the Mormon Church must have applied a great deal of pressure on him to discontinue publication and destroy all copies in house. Original dark green decorated cloth, titles on front cover and spine stamped in black ink, 222 pp., frontis. [photograph of E. N. Wilson], preface, illustrated, portraits, plates. Born in Illinois in 1842, Wilson crossed the plains by ox team in 1850 and spent the remaining years of his life in Utah where his parents settled. At the age of twelve he ran away from home to join the Shoshone Indians, with whom he spent two years, immersed in Indian life and their customs. Later he became a rider for the pony express, then a driver on the overland stage route. To the end of his days he remained a friend to the Indian and was rewarded with friendliness in return. Graff 4702: "A good narrative of Rocky Mountain trapping. Uncle Nick crossed the plains by ox-team in 1850, and thenceforth was trapper, Indian fighter, pony express rider, ox-team freighter, overland stage driver, companion of Kit Carson, and adventurer in Utah and through all the Rocky Mountain country. The first issue was rigidly suppressed." Howes W520: "Blunt, unrestrained narrative of a trapper, Indian fighter, etc., of the Rocky Mountains, from Wyoming and Montana to Idaho and Utah. The 247 page reprint omits the account of how he lost his Mormon fiancee [given on pp. 194 to 200 of original edition]." Flake 9909: "This first edition was suppressed as critical of polygamy." Bauer Sale 515: "When the book was in sheets, [quoting Elijah N. Wilson], ready for binding, objection was made to the passage beginning on page 194. Under pressure I rewrote that part and added 25 pages to the original but had 20 copies bound as originally written. These I kept for the members of my family." Wilson was also critical of the church's handling of the Mountain Meadows massacre, and in general their handling of Indian affairs as he was sympathetic to the Indian point of view. Wilson, Wyoming was named in honor of Elijah N. Wilson. Some light professional restoration to spine ends and corners, else near fine, bright, tight copy, housed in a decorated cloth clamshell case with titles stamped in black on the spine. A rare book with the rare unexpurgated tale.

Tombstone, A. T. A History Of Early Mining, …
WM. B. SHILLINBERG

Record Of Engagements With Hostile Indians Within The …
LT. GEN PHILIP H. SHERIDAN

The Masters Of The Wilderness: A Study Of …
CHARLES B. REED