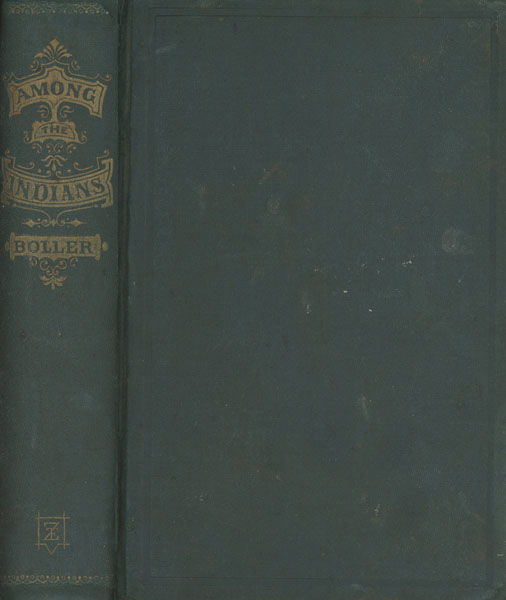 Among The Indians. Eight Years In The Far West: 1858-1866. Embracing Sketches Of Montana And Salt Lake

Other works by HENRY A. BOLLER

First edition. 12mo. Original green cloth, with title in gilt on the spine with the publisher's monogram, xvi, 17 - 428 pp., preface, large folding map. Eberstadt 107:33 says: "This important work is of rare occurrence and the valuable map (here present) is almost invariably lacking. Boller voluntarily entered upon a project to penetrate the wilderness and spend a decade among tribes as yet uncorrupted by white 'civilization.' He set out from St. Louis in May of 1858 with Vaughn, Malcolm Clark and a company of fur traders with whom he travelled as far as Fort Williams. Here, Boller parted with his associates and, taking Bourgeois McBride as his only companion, set forth into the wilderness where for eight years he roamed totally dependent upon his own resources and the uncertain friendship of the savages. His narrative of this experience, taken from the journal and notes kept by him, is one of the most valuable relations of early days and life in the Far West, as well as a minute account of the Indian tribes among whom he lived which include the Sioux, Gros Ventres, Mandans and Assinaboines. He describes the trading posts; the trappers and traders; the Indian wars and massacres; the Idaho and Montana gold mines; life at the mining camps; the Vigilance Committee; a trip to Salt Lake; life among the Mormons; and his return trip in 1866 by way of the Missouri River to St. Louis." Howes B579 says: "Most authoritative narrative of fur-trading among the plains Indians of the upper Missouri, for that period." Six Guns 235 says: "Rare." "Has a short chapter on the vigilantes and outlaws of Montana and the hanging of Henry Plummer, but most of the book is devoted to the author's life with the Indians. Most of the existing copies of this rare book lack the map." This copy has the rare map. A solid very good copy housed in a matching cloth slipcase.

Over The Plains, On The Mountains; Or, Kansas, …
JOHN H. TICE

Three Thousand Miles Through The Rocky Mountains.
A. K. MCCLURE