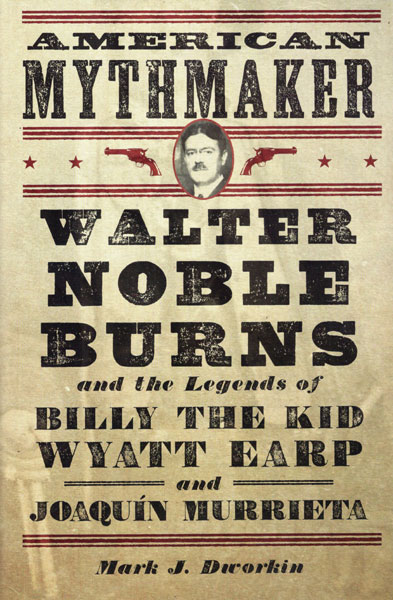 Other works by MARK J DWORKIN

First edition. 8vo. xv, 269 pp., contents, illustrations, preface, acknowledgments, author's note, appendices, notes, bliography, index. "Walter Noble Burns, a Chicago Inter Ocean book critic fell in love with Wild West lore and popularized the stories of its most legendary figures while attempting to get at the historical truth of their lives and times. Burns made extensive use of in-depth interviews and immersed himself in contemporary newspaper accounts of events concerning his subjects. He also resided for months in Tombstone to unearth the story of that notorious Arizona mining town and its gunslingers. He traveled across New Mexico for three months to gather details necessary to re-create the characters in the Lincoln County War. With Burns's retelling of the Lincoln County War, Billy the Kid, aka William Bonney, became a household name. Dworkin convincingly argues that scholars have ignored Burns because of the way he blended the factual with the fictional in telling lively, flowing stories of Billy the Kid, Tombstone lawman Wyatt Earp, and Mexican outlaw and folk hero Joaquin Murrieta. Burns's belief that good history must be interestingly told led him to take liberties in describing the critical events of these people's lives. In this book Dworkin seeks to establish that Burns wasn’t just a hack writer but rather Burns was intentionally creating a mythology for America. The first book-length biography of Walter Noble Burns (1872-1932). As new, unread copy in dust jacket.

The Midewiwin Or "Grand Medicine Society Of The …
W. T. HOFFMAN

History Of "Billy The Kid."
CHAS A SIRINGO