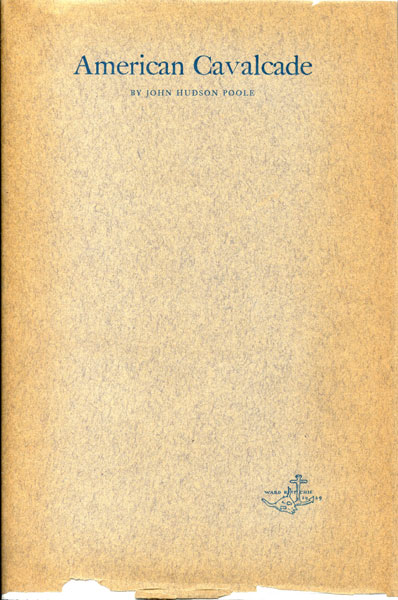 American Cavalcade. A Memoir On The Life And Family Of Dewitt Clinton Poole

First edition. 8vo. Limited edition of 150 copies. Light blue cloth, titles stamped in gold gilt on the front cover and spine, xiii, [blank], 350 [1] pp., frontispiece [portrait of DeWitt Clinton Poole], preface, prologue, illustrated, plates, portraits, maps, index. Most of the early part of the book details family history. Of most interest were the accounts starting from the late 1860s when Poole was sent West and his accounts of the Indians. He was an Indian Agent at the Whetstone Agency, later assigned to the 22nd Infantry at Fort Randall, Dakota, on escort duty on the Yellowstone Expedition 1871 - 1873, then riot control in New Orleans, transferred to Fort Wayne, Detroit 1875, sent from Fort Wayne to reinforce Terry's men after the Custer massacre. In September he was assigned to General Miles' unit to continue the campaign. In 1879, he transferred to Texas at Fort McKavett, then later to Fort Clark, where Generals Stanley and Otis were also there. Information is provided on Sitting Bull and an account of his death, the Battle of Wounded Knee, Grand Duke Alexis and the buffalo hunt, Buffalo Bill and much more. Dewitt C. Poole wrote AMONG THE SIOUX OF SOUTH DAKOTA: EIGHTEEN MONTHS EXPERIENCE AS AN INDIAN AGENT published in 1881, and he tells us of life as an Indian Agent at the Whetstone Indian Reservation in the 1860s, and as a prominent figure in military events on the Dakota, Wyoming, Montana, Texas frontier. Former owner's inked name on front pastedown sheet and the rear endpaper, light offsetting to front and rear endpapers, else a fine, bright copy in dust jacket with chips to spine ends and the extremities. An important book and scarce.

Quantrill And The Border Wars.
by William Elsey. Connelley