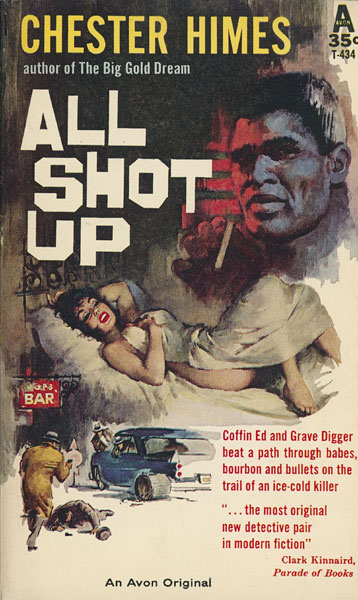 Other works by CHESTER HIMES

First edition. PBO. Avon T-434. Fine, unread copy in pictorial wrappers. Originally published in French under the title Imbroglio Negro. "It was hailing bullets in Harlem and cold enough to embalm a corpse. Eight-count 'em, eight-corpses, in fact. A gold Cadillac mowed down an old lady who was neither old nor a lady. Three guys kissed concrete outside an exotic bar while heisting fifty grand from a politician. Then Detectives Coffin Ed Johnson and Grave Digger Jones tore into the caper, well-oiled with bourbon and ready to roll down a crazy, brutal trail of violence, perversion and murder. Through the long, bloody weekend, skidding on ice and breathing fire, the free-wheeling pair from Harlem Homicide dodged falling bodies as they closed the gap between them and sudden death." Recommended.

The Case Of The Negligent Nymph.
ERLE STANLEY GARDNER

A Game For The Living.
PATRICIA HIGHSMITH