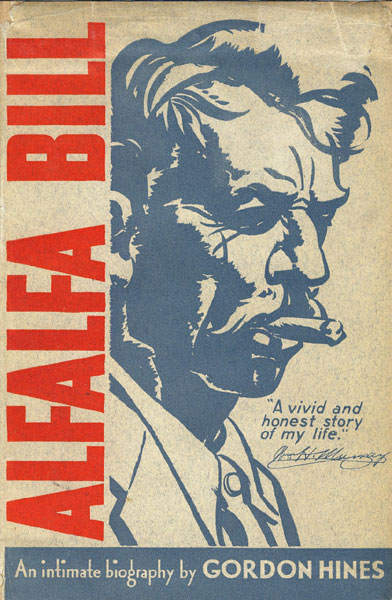 First trade edition. 8vo. Inscribed by the author. 14.2 cm x 22 cm. Decorated cloth, frontis. [portrait], ix, [1], 308 pp., foreword, illustrated. Vivid and spectacular biography of Alfalfa Bill Murray, Oklahoma's very unusual governor. Time magazine said in part of Governor Murray, "He is the political darling of poor men everywhere. He is scorned by the literate and urbane; yet he is probably better read than the average run of U. S. Presidents." Murray was an American educator, lawyer, and politician who became active in Oklahoma before statehood as legal adviser to Governor Douglas H. Johnston of the Chickasaw Nation. Although not American Indian, he was appointed by Johnston as the Chickasaw delegate to the Convention for the proposed State of Sequoyah, and was later elected as a delegate to the 1906 constitutional convention for the proposed state of Oklahoma. Fine, bright copy in internally reinforced dust jacket with moderate wear to spine ends and corner extremities.