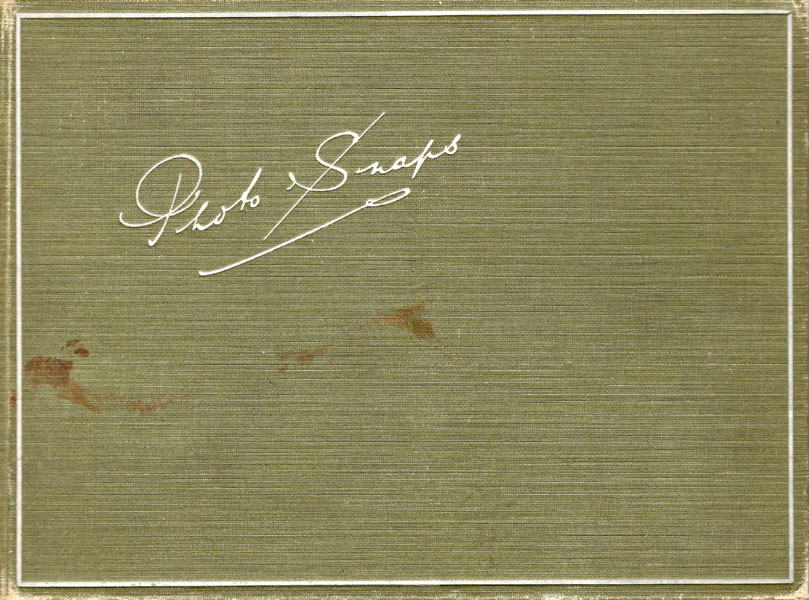 Album Of Photographs, Documenting A British Couple's 1927 Journey Across America

1927. Original photograph album. Hardcover. Contains 27 black-and-white photographs, mounted behind pre-cut frames in leaves of heavy green stock. Bound in 5 3/4" x 7 1/2" green cloth, with the words "Photo Snaps" on the front cover. Inside the cover is a handwritten description of the couple's travel itinerary, June 8 to September 25, 1927, beginning with: "Sailed from Southampton for New York, June 8, 1927, U.S.S. Coronia." After docking in New York, they proceed to Boston and "New England cities," then back to NYC. From there, they take the B & O Railroad to Philadelphia, Washington, and Chicago, a rail journey that takes two weeks. From Chicago, they proceed to Springfield, Illinois, where they visit Lincoln’s Tomb, then on to St. Louis, Kansas City, Los Angeles, and San Francisco. By September 11th, they take the train back from the West Coast to Chicago, then return to NYC, sailing for Plymouth, England on September 16 aboard the USS Caronia. The compilers, an elderly couple, are together in one photograph and the man appears in several later pictures. They visit three colleges on their journey: Harvard, University of Chicago, and Stanford, taking one photograph at each. They also visit Mt. Diablo in Clayton California, and there are six photos of Mt. Diablo, Devil’s Pulpit, Mark Twain’s Cabin, etc. Other scenes include five of "American Indians" taken at Albuquerque and environs: three depicting Native Americans selling "curios" and two showing "Homes of American Indians Taken while on the Train." (The homes are ranch-style houses.) There is one photograph of "American Negro at his home," showing a man in a suit with a child, and the photo is signed "Shelby Freem[an]" Also, the couple visit "the Ranch" in Pittsburg, CA, where they see their "cub" (a toddler—grandchild?—posed in his walker) and their son or daughter and his/her spouse ("the Ranchers"). Very good condition.