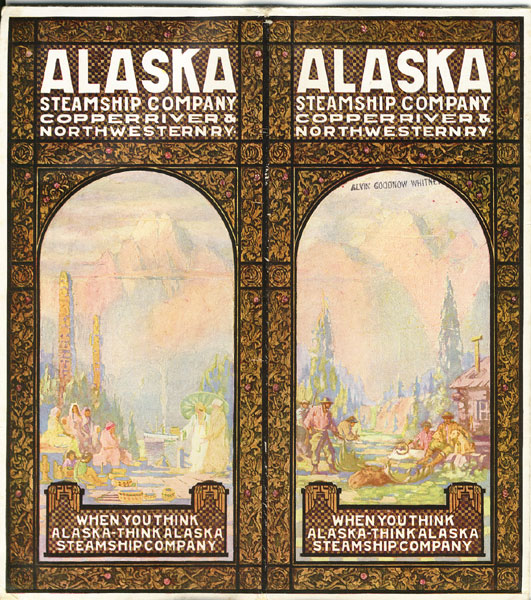 Other works by Alaska Steamship Co.

27" x 32" sheet folded to 48 panels measuring 9" x 4" each (two panel constitute cover and are not numbered). 22 numbered panels with text and illustrations (some color) of the area. On opposite side of text are 24 panels depicting a large map of Alaska showing the Alaska Steamship Co. routes, table of distances from Seattle to various points in Alaska. Large map is bordered on top and bottom sides by photographs of the various areas in Alaska. Inset is a smaller map (11" x 8") of the Copper River & Northwestern Railway and The Alaska Railroad showing Copper River Region in Alaska, Prince William Sound, The Richardson Automobile Highway, Mt. McKinley National Park, Government Telegraph Line and Tributary Territory. Brochure touts the wonders of Alaska to include information on its glaciers, it cities, its mountains, etc. Information offered on Golden Belt Line Tour and the Prince William Sound Cruise. Photographs of the Alaska Steamship Company's fleet, as well as photos of the interior of the ship and information on the accommodations. Minor wear to the folds, light soiling and with previous owner's name stamped on cover panel. Very good.

Robbers, Rogues And Ruffians. True Tales Of The …
HOWARD BRYAN