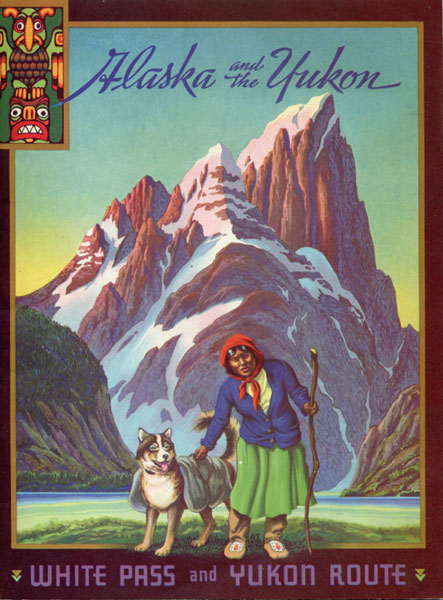 Alaska And The Yukon. White Pass And Yukon Route / (Title Page) Go North Where The World Is Young

Other works by FREDERICK HIREN

Produced for the White Pass and Yukon Route Railway. 10 1/4" x 7 3/4" in bright, colorful pictorial wrappers with an illustration of an Eskimo and her dog in the foreground and mountains in the background. [32] pp. Illustrations. Map. The White Pass and Yukon Route is a Canadian and U.S. narrow gauge railroad linking the port of Skagway, Alaska, with Whitehorse, the capital of Yukon. This is an isolated system and has no direct connection to any other railroad. Equipment, freight and passengers are ferried by ship through the Port of Skagway, and via road through a few of the stops along its route. Offers information on the Inside Passage; Skagway; the White Pass; the Summit where both the American and British Columbian flags fly; Carcross; Whitehorse; the Yukon River, the Yukon; the caribou herds and other wildlife; the Five Finger Rapids; Dawson; Purgatory; West Taku Arm; etc. Information on the Yukon River Circle Tour. Numerous photographs and illustrations throughout. 6 full-page color illustrations by John Segesman showing various scenery. Photographs include scenery, the railway, the summit, the rapids, mining scenes, Dawson, etc. Double-page color pictograph map at center showing the White Pass & Yukon route Railway, the Alaska Railroad, ocean routes to Skagway and Seward. Very light soiling to wrappers along with light wear to the extremities. A very interesting and nicely produced booklet.

The Silver Short Line. A History Of The …
TED AND HARRE W. DEMORO WURM

The Land Of Palms And Sunshine. Miami By …
City Of Miami