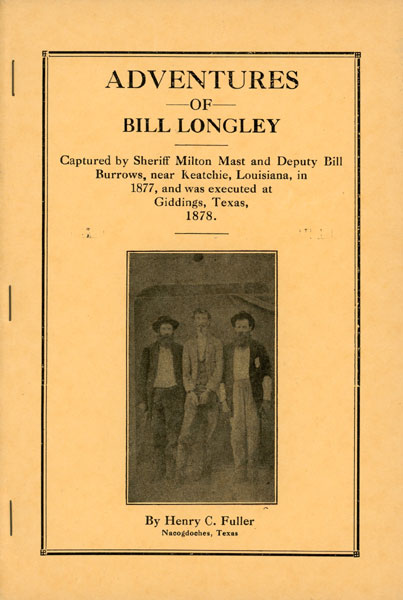 Other works by HENRY C. FULLER

First edition. 8vo. Stiff printed wrappers, no pagination (72 pp.), frontispiece, introduction, illustrated, double column, advertisements. Born in Austin County, Texas in 1851, Bill Longley began a life of crime at the age of 16. Murder, cattle rustling, and counterfeiting were among the things for which "Bloody Bill" Longley was known. Repeatedly arrested and imprisoned, Longley always seemed to find a way to escape. His luck ran out when he was legally hanged in Giddings, Texas on October 11, 1878. He has a record of 32 killings! "A complete story of the life of one of Texas' most notorious outlaws. It is said he had his picture made standing between his heavily bearded captors so that the world would know he was not captured by 'kids'."---Ramon Adams. An unusually attractive copy and in fine condition. Very scarce.

Casement Of Juniata (As Man And As A …
DONALD R. ORNDUFF