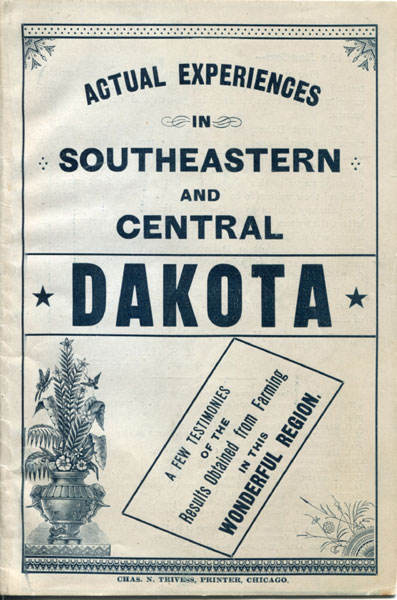 Actual Experiences In Southeastern And Central Dakota. A Few Testimonies Of The Results Obtained From Farming In This Wonderful Region

First edition. 7 5/8" x 5 1/8" original stapled, printed wrappers, 16 pp., map of the Chicago & North-Western Railway system on the back cover. Primarily a series of signed testimonials solicited by the Railway to describe "the Dakota boom." Farmers relate their experiences settling and cultivating the land, detail their crop yields and profits from cattle ranching, and encourage further settlement, as land is still inexpensive and readily available. Several describe the settlers as "a most excellent class of people," who are educated, industrious and and morally upright. And if that’s not incentive enough, there’s the unsurpassed healthfulness of the air, which is "free from malaria, and full of inspiring oxygen and invigorating ozone." 3 copies found in OCLC. Top corner of rear cover has been torn away but with minor influence on the railway system map, else very good.

The Youngers' Fight For Freedom. A Southern Soldier's …
W.C. BRONAUGH