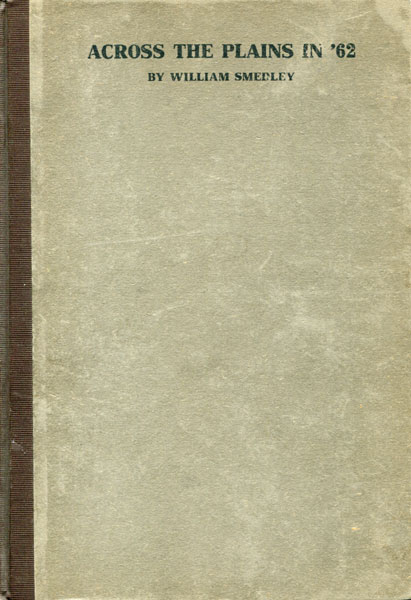 First edition. 8vo. Author's inked generic inscription, signed and dated in the year of publication on the half title page. Boards, with cloth spine, 56 pp., frontispiece, map, and 4 additional plates. This rare account was privately printed for family members and was identified by Edward Eberstadt to be "one of 50 copies." William Smedley spent 5 months traveling the Oregon Trail, by ox-team, from Council Bluffs to Salem, Oregon, in the summer of 1862. Smedley's day-by-day diary is recorded here, with considerable detail. An interesting and rare work. Mintz 427 says "Smedley's interesting day-by-day diary tells of still another instance where the author, quite sickly during his lifetime, develops into a robust pioneer once on the trail. His story of traveling overland to Oregon with a wagon, and usually only one companion, is a strong argument for those who lean toward the belief that small parties fared the best. His two worst enemies were mosquitoes and Indians." Very good copy.

No Country For Old Men.
by Cormac. Mccarthy

The Missouri Breaks.
by Thomas. Mcguane

Omaha. Synopsis Of Facts And Figures For The …
by Omaha Real Estate Exchange

The Zia Company In Los Alamos.
by Robert E. Mckee