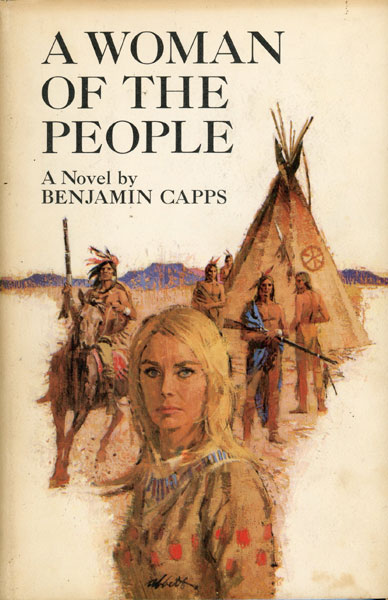 A Woman Of The People.

First edition. 8vo. Fine in dust jacket, lightly soiled on the lower portion of the rear cover and lightly faded on the spine. Novel about a white girl raised by Comanches. Classics of Texas Fiction says, ..."one of the finest novels written in America. It deserves its place alongside Huckleberry Finn and The Great Gatsby as an American classic about life among the savages." Greene says: “[Referencing the title character] Her name had originally been Helen Morrison before she was captured by the Comanches and became a Comanche warrior’s wife and a Comanche mother….The comparison of Helen Morrison to Cynthia Ann Parker is inevitable and valid. But the stories are not parallel. [This] is a psychological study of what goes on in the mind of the woman, the counting and discounting of circumstances--- and the absolutes of reality…. Capps’s finest book, although he has written a number of other good ones.” While fiction, the author does an excellent job of depicting the cultural and daily life of the Comanche.

Gifts Of Mother Earth: Ceramics In The Zuni …
by Ph.D., Margaret Ann Hardin