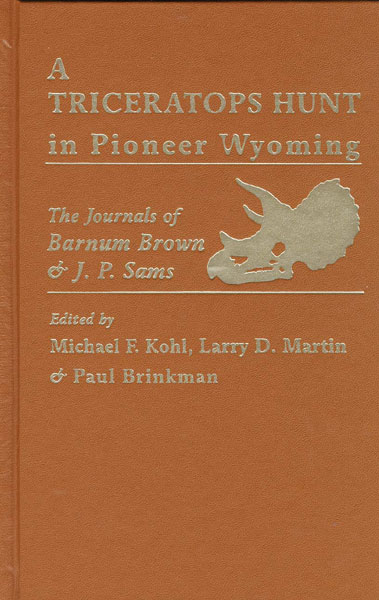 A Triceratops Hunt In Pioneer Wyoming. The Journals Of Barnum Brown & J. P. Sams. The University Of Kansas Expedition Of 1895.

First edition. 8vo. Limited edition of 238 copies numbered and signed by the three editors. Tan fabricoid, titles stamped in gold gilt on the front cover and spine, xi [blank], 13-188 pp., acknowledgments, a note about the sources, introduction, illustrated, maps, endnotes, bibliography, index, about the editors. One June Morning in 1895, five men ... a politician, a professor, two students and an interested citizen left Lawrence, Kansas for the Cretaceous rocks of eastern Wyoming, hoping to find dinosaur bones. The two students ... Barnum Brown and Elmer Riggs ...would go on to lead two of the most important American careers in dinosaur paleontology of the twentieth century. Professor Samuel Wendell Williston wanted the skull of a Triceratops. What would come to be called the Kansas University Expedition of 1895 would succeed in finding just such a skull. Two accounts of the expedition survive, and both are offered here. Both offer fascinating snapshots of the West at the time. They give not only an account of the scientific exploration for dinosaur bones, but also a view into Wyoming when it was still just a territory and cowboys, Indians, cavalry, dinosaur hunters, and oil explorers shared the plains at the same time. The first journal was kept by Brown on his wagon journey from Kansas to Wyoming. The second and far more extensive journal was kept by James Polk Sams, a middle-aged Kansas farmer, former probate judge, and member of the Board of Regents of the University of Kansas. The journals are written in a way that is easy to follow and gives day-to-day accounts. As new, unread copy, without dust jacket, as issued.

Notes Of Travel Through The Territory Of Arizona. …
MARION, J. H. [EDITED BY DONALD M. POWELL]