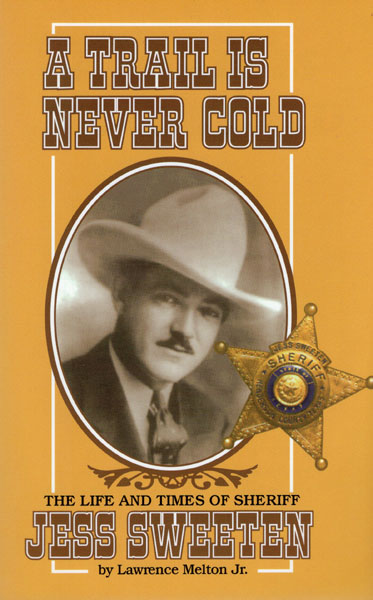 A Trail Is Never Cold. The Life And Times Of Sheriff Jess Sweeten

First edition. 8vo. Color pictorial, stiff wrappers, iv, 284 pp., introduction, foreword, illustrated. The life, history, and events of Sheriff Jess Sweeten of Henderson County, Texas. "Sheriff Jess Sweeten arrived in Henderson County, Texas at a time of blood and dying. It was the thirties—a decade of unparalleled lawlessness in the history of our nation. He was a young man—barely twenty-four years old, but he brought special equipment for the job: two hundred twenty pounds of rock-hard muscle a dedicated spirit, iron fists and a pair of Colts .45 automatic pistols. During Sweeten’s first term as Sheriff the McGehee family of four was reported missing from George Patton’s fifty-four acre farm—roughly eight miles north of Athens, Texas. The farmer told Sweeten that two men—supposedly friends of the McGehee’s drove out to his place late one night around midnight and honked the horn. He said, J. W. McGehee got out of bed and went outside to talk with these men. According to Patton, they talked for about five minutes then J. W. McGehee came back inside very excited and said to his wife, “Honey, get up and get your duds on, we’re headed to the oil-fields.” That was Thanksgiving Day, 1932. In those days, a lawman relied solely on his common sense and dedication. Jess was dedicated. He traveled across the back roads day and night searching for leads and scraps of information that often led nowhere. The state had no crime lab to speak of, and he had only one outside deputy to cover the largest county in East Texas, with a population of thirty-five thousand. However, in a period of four short years this,“Boy Sheriff had solved eight "perfect-crime” murder cases. In his amazing twenty years as sheriff of Henderson County, Texas, Jess had solved a total of eighteen murder cases. He solved all the cases involving hijacking by firearms and eighty-five percent of all burglaries. When Jess retired in 1954, there were no unsolved murder cases, stick-up, or hijacking cases and not a single case of rape went unpunished while he was sheriff of Henderson County. Jess Sweeten’s record stands as one of the finest records of achievement in the history of law enforcement. When a crime was committed in Henderson County, Jess took it personally. And when Mrs. Florence Everett pleaded with the young Sheriff to find her missing family, Sweeten was true to his word. It took four years of relentless determination but Jess Sweeten got his man. Mention his name to the old-timers of Henderson County and you’ll hear stories that, at first, will sound as though they’re pulling your leg. Some will tell you he could track a minnow through a swamp on a moonless night in a drizzling rain. Others will tell of the time that he placed an ad in the Police Gazette inviting Machine Gun Kelley, Bonnie and Clyde, Pretty Boy Floyd, John Dillinger, and host of others to meet him in Henderson County for a final shootout. Raymond Hamilton, a member of the Barrow gang, confessed to a Dallas newspaper that Clyde and Bonnie always avoided Henderson County because of Sweeten’s reputation with firearms and the fact he was known to carry amour piercing ammunition. “Jess was not a mean man,” said an old-timer, “But he was sure decisive when a mean one came along.” Pat O’Brien, the movie actor, summed him up this way: “I had always wanted to meet him. I was looking for this rough and tough Texas sheriff whom I had been reading about—then, in walks this well dressed gentleman with a voice who could put a baby to sleep. However, I knew his quiet manner only masked the caged dynamite that could be unleashed at a moment’s notice.” Once an outlaw had a rifle aimed squarely at Sweeten’s head and before the man could squeeze the trigger, Jess pulled his pistol and fired. The three slugs from Sweeten’s .45 Hit the target’s chest, neck and forehead and the outlaw died instantly. Jess was half Irish and Cherokee. He stood six feet, four and a half inches tall and weighed two hundred-twenty pounds. He survived five assassination attempts, three car wrecks and a total of eleven gun battles, but three of those eleven had to be killed. “It was kill or be killed,” he said. Fine, unread copy.

Logan: The Honorable Life And Scandalous Death Of …
by Jackie Boor