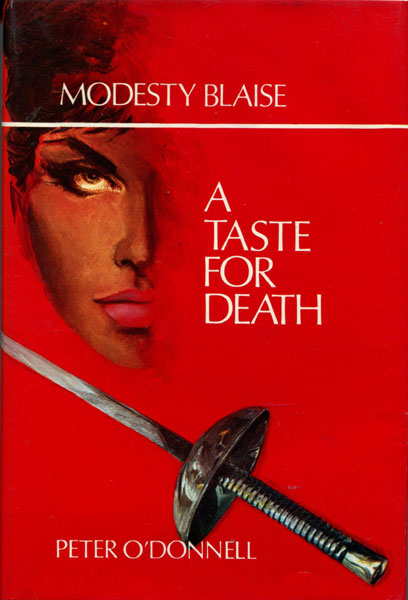 A Taste For Death.

First edition. Fine in price-clipped dust jacket, lightly sunned on the spine and with a tiny scratch on lower portion of back panel. While pearl-diving in Panama, Willie Garvin rescues a blind girl from hired killers. It seems she has rare and secret talents that a crime syndicate, led by the antithesis, Gabriel, would kill to obtain. Meanwhile in London, Modesty meets a man, Simon Delicata, with a taste for death and with such unnatural strength as to be a freak. When the link between Gabriel and Delicata becomes clear, Modesty and Willie realize what they are up against and that it's too late, for they are being held captive, deep in the Sahara with the zombies of Mus. The blind girl's uncanny gift is being used to unravel a two thousand-year-old secret, of Domitian Mus, a tribune of Rome. A secret worth millions. In our experience, one of the more difficult Modesty Blaise titles.

Protocol For A Kidnapping.
by Oliver. Bleeck

The Sands Of Sakkara.
by Glenn. Meade

No Experience Necessary.
by Charles Willeford

The Gentlemen Of 16 July.
by Rene Louis And Ken Follett. Maurice