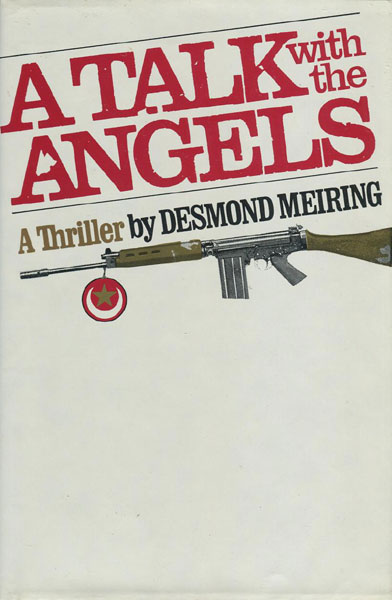 A Talk With Angels.

Other works by DESMOND MEIRING

First U. S. edition. Review copy with slip laid-in. Fine in dust jacket. Colonel Tarek Daniel Gad of Cairo's anti-terrorist squad meets with a disgruntled member of the Angels of the Sword, a tight-knit group of religious fundamentalists who intend to make Egypt a fully Islamic state. Before Gad can penetrate their defenses, his informant is dead, a cycle that repeats itself as he begins to investigate the upsurge in terrorist activity. It emanates from a cell led by Abbas Sidki, a hero of Sadat's October war. On the fourth anniversary of Sadat's assassination, Sidki will be aiming a high-powered rifle at a motorcade carrying Egyptian President Mubarak and the American President. Orchestrating this coup are an Englishman, an Israeli and a Libyan, an unlikely triumvirate with political and personal reasons for engineering Mubarak's death.

The Art Of The Mystery Story. A Collection …
HAYCRAFT,HOWARD [EDITED AND WITH A COMMENTARY BY]