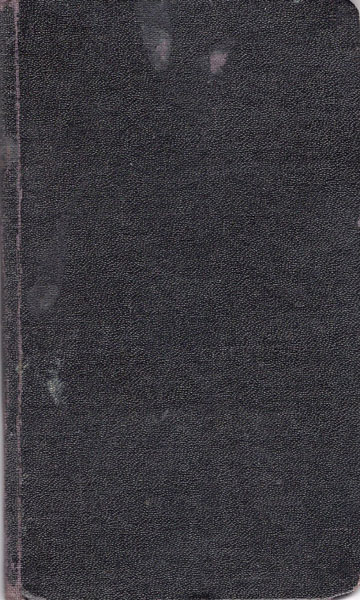 First edition. 6" x 3 1/2" cloth covered booklet, 42 pp of entries plus the remaining pages are blank. Small notebook with thin cloth covered boards, being the “private” log book of Herbert Truman Smith SM3/c, U.S. Navy, from January 1944 until his discharge in 1947. In it, Smith records the locations and activities of several ships on which he served, including the U.S.S. Warrick AKA89, U.S.S. LSM 238, U.S.S. Pollux AKS-4, and U.S.S. Le Juene AP74. Smith devotes two pages to his first several months of training before leaving California on the USS Warrick in September, 1944. “Joined Navy Jan 18, 1944. Sworn into Navy Jan 18. Left home Jan 19 for Farragut, Idaho. Arrived Farragut Jan 20. Stayed alnight [sic] in receiving barracks. Jan 21 went through tough physical examination. Got my boots, haircut, and gear. Left for Camp Ward. Arrived Camp Ward and started boat training. April 4 left Camp Ward for 15 day boat leave. Went home. April 19, report into O.G.U. Farragut. Stayed there a week. April 26 left O.G.U. and went to Camp Peterson for signal school. April 27 started mess cooking for two weeks. May 11 started to signal school for 16 weeks. July 28 left signal school on a 9 day delaid [sic] orders. Aug 2 arrived Treasure Island assigned to U.S.S. Warrick stayed in barrack on Treasure Island until the U.S.S. Warrick was read to go into commission.” The USS Warrick was commissioned on August 30, 1944 and Smith set sail on her for training along the California coast on September 11, 1944. On October 25, 1944, he notes “Left the United States of America”. The USS Warrick was an Andromeda-class attack cargo ship and served in the South Pacific throughout most of her war-time experience. Such ships were responsible for delivering and disbursing goods and equipment to locations in the Asiatic-Pacific Theater, including the assault on Iwo Jima. Smith’s brief entries note when the ships he served on arrived and departed from various ports, including Manus Island, Hollandia, Aomori, Langemak [sp?] Bay, Finch Hafen, Manila, Luzon, Melina Bay, Guam, Samar, and Iwo Jima. A few cryptic notes are added to the notations of the ships’ movements. On December 26, 1944 he records, “6th Army troops came aboard”, and on April 1, 1945 he noted, “81st Infantry Division embarked”. On August 15, 1945, while in New Guinea, he wrote, “Announcement made that War is over” and the next day noted the “First Crews Dance”. After the war he made several cruises to Japan, Tsing Tao, Shanghai and Hong Kong. It appears as though he participated in the Philippine Liberation Campaign while on the USS Pollux and US Navy troop transports while serving on the USS Le Juene after the war before his discharge in 1947. On two pages, he records 37 different ports that he visited while serving in the Navy. After the war was over, his entries are a little more newsy. December 25, 1946: “Lost [name] overboard. Drowned. What a way for a guy to go when he hated small craft.” January 1, 1947: “Welcomed New Years in out in the middle of the ocean. Not much like last year. That afternoon the Skipper broke out a couple of fifths of whisky and we all had a couple of shots.” January 10, 1947: “We’ve been underway nineteen days now. Still a couple to go to make Pearl [Harbor]. We’ve been out of flour for over a week. Ran out of flour about 10 days. Ate cracker for the next 4 days than ran out of crackers. Been eating sea biscuits for the last 4 days. Probably eat them until we get to Pearl or run out. Boy are sea biscuits hard.” Among his last few entries, Smith writes, “Transferred to USS Le Juene (AP74) for transportation to Uncle Sugar for discharge”; “Left Y.B. (Yerba Buena Island) for home for good. The long sad end.” An interesting log book/diary relating to a seaman’s WWII and post-war Navy stint. Very good copy.