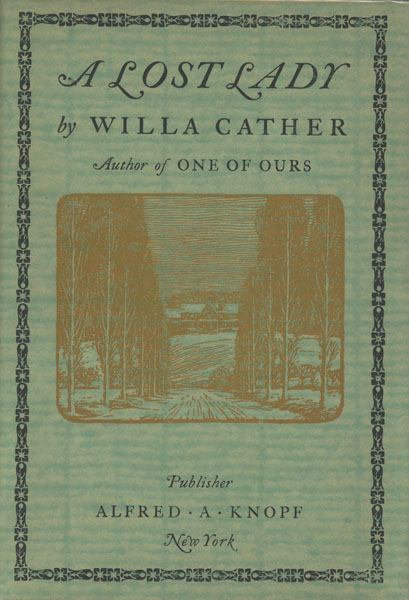 Other works by WILLA CATHER

First trade edition. Light green cloth, titles (not Cather's name) stamped in gilt at the upper front cover and spine, color decorated front and rear endpapers, 173 [1] pp., with maroon top stain unfaded. A sharp copy of Cather's sixth novel, centered around "a lady lost between the nineteenth century and its values and the hurly-burly and changing modes of the twentieth century. In an age when woman's life consisted of dependence on man, she would have been a lady; in the twentieth century, she was scarcely that" (Coan, p.115). Prior to publication, A Lost Lady was serialized in Century magazine (April-June, 1923); Alfred Knopf published the first printing in a run of 20,000 copies – at the time, the largest edition of any book he had printed since founding the publishing house in 1915. The novel was a significant influence on F. Scott Fitzgerald while writing The Great Gatsby, and basis for two film adaptations between 1924-1934. Crane A13.a.i. Fine, bright copy in dust jacket housed in the original, unprinted presentation carton. There may be another copy as nice as this one, but none better.

"The Holiness Of Beauty," St. Philip's In The …
MARY HUNTINGTON ABBOTT

A Voice For The Dead. A Forensic Investigator's …
JAMES E. WITH KATHERINE RAMSLAND STARRS