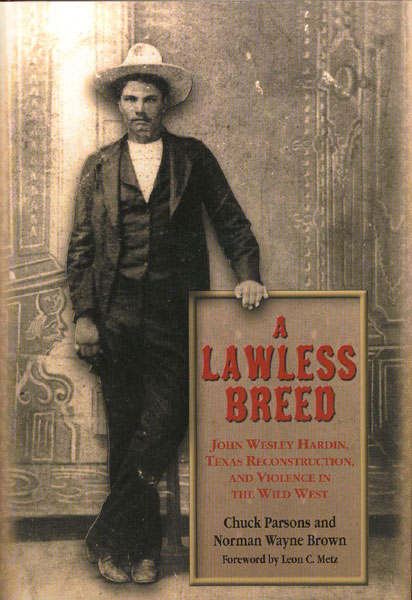 Other works by CHUCK AND NORMAN WAYNE BROWN PARSONS

First edition. 8vo. Signed by Chuck Parsons. Bright red cloth, titles stamped in gold gilt on the spine, xxii, 490 pp.,foreword, preface, acknowledgments, introduction, illustrated, portraits, maps, appendix, endnotes, bibliography, index. Foreword by Leon C. Metz. Rick Miller says, "The best known outlaw of pioneer Texas was John Wesley Hardin. Misspent as his life might have been, he was a deadly gunman and acknowledged by his contemporaries as a man who wore his emotions on his sleeve and not to be crossed. From an early age to his violent death with his boots on, he left behind a unique paper trail, including an autobiography. Parsons and Brown have dug deep in that trail and come up with a definitive biography that not only accurately tells the saga of Hardin's life, but also does it in a readable manner that puts his life in context with the times." Also promotional blurbs by Leon C. Metz, Bill O'Neal, David Johnson, as well as Rick Miller. As new, unread copy in dust jacket. A MUST read for those interested in the life and times of John Wesley Hardin.