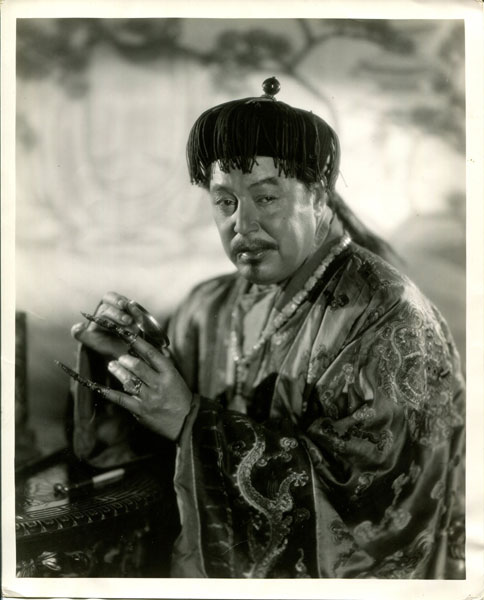 Two 9 3/4" x 6 1/8" sheets on Oland's personal stationery. In a chatty, two-page, inked, holograph letter, signed in full and dated "August 7th," 1930, to a former friend and associate in Massachusetts. In the letter he mentions the recipient should look "in on my Chinese Mask in 'Dr Fu Manchu.' It must be playing Boston at this time. It is a record-breaker in N. Y." In an 8" x 10" publicity photograph, the actor appears in full costume in the movie "The Insidious Dr. Fu Manchu." The photograph is stamped on the verso by Paramount Pictures and captioned in an attached carbon typed note. Caption mentions that Oland has the title role in an all talking picture and also credits Sax Rohmer as the author of the famous series of stories.. The other 8" x 10" publicity photograph shows Oland as Charlie Chan posing with Japanese military officers in 1936, while filming "Charlie Chan's Secret." An identifying description of the cast of characters is affixed to the bottom of the photograph. Many of the Japanese officers pictured were present when Pearl Harbor was attacked in 1941. Warner Oland was a native of Sweden who gained his greatest measure of success playing Asian characters. He appeared as Dr. Fu Manchu four times and as Charlie Chan in sixteen films. The photograph of Oland as Charlie Chan and the Japanese officers has some damage to the lower right side of the picture and is in very good condition. The photograph as Dr. Fu Manchu and the two-page holograph letter are in fine condition.

Right To Die.
by Jeremiah. Healy