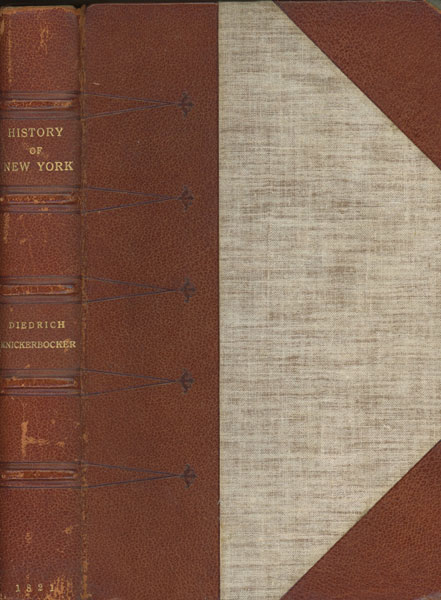 A History Of New - York, From The Beginning Of The World To The End Of The Dutch Dynasty; Containing, Among Many Surprising And Curious Matters, The Unutterable Ponderings Of Walter The Doubter, The Disastrous Projects Of William The Testy, And The Chivalric Achievements Of Peter The Headstrong, The Three Dutch Governors Of New - Amsterdam; Being The Only Authentic History Of The Times That Ever Hath Been Published

A New Edition. Originally published in 1809. Three quarter leather and cloth, raised bands, titles stamped in gilt on the spine, decorated front and rear endpapers, xxviii, 372 pp., top edges gilt, account of the author, preface. "Diedrich Knickerbocker is an American literary character who originated from Washington Irving's first novel A History of New-York from the Beginning of the World to the End of the Dutch Dynasty, by Diedrich Knickerbocker (1809). He is a Dutch-American historian who is dressed in a specific type of baggy-kneed trousers which coined the eponym knickerbockers. The word knickerbocker is also used to refer to people who live in Manhattan to the End of the Dutch Dynasty, by Diedrich Knickerbocker (1809). It was a satire of the politics of the day and history books. To promote the book he started a hoax by contacting various newspapers in New York City that "well-known Dutch historian Diedrich Knickerbocker had disappeared from his hotel." Irving informed people that if Mr. Knickerbocker remained absent he would publish a manuscript that the man had left behind. Many people at the time believed the story and when Irving finally revealed it was all made up he gained enough local fame to help his book become an instant success, practically launching his literary career. One of Irving's friends was actually named Knickerbocker: Herman Knickerbocker (1779-1855). Herman knickerbocker, in turn, was of the upstate Knickerbocker clan, which descended from a single immigrant ancestor, Harmen Jansen van Wijhe Knickerbocker. Jansen van Wijhe invented the name upon arriving in New Amsterdam and signed a document with a variant of it in 1682. Contents sound and tight. The leather has some light wear, which is mostly rubbing to the spine, spine ends, corners, and top edge of rear cover. Overall a near fine copy.

On The Big Range. A Centennial History Of …
by A.J. Simmonds

Back In Cripple Creek
by Mabel Barbee Lee