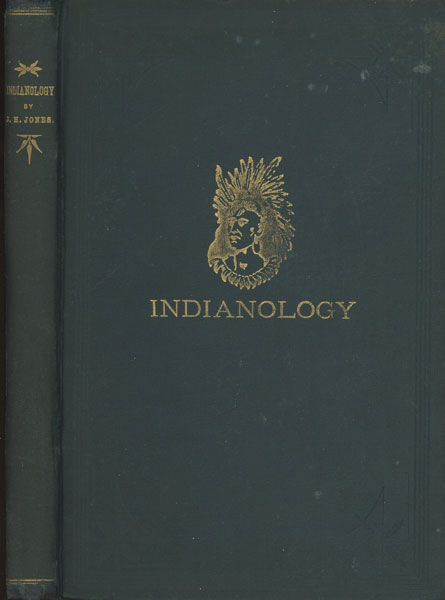 A Condensed History Of The Apache And Comanche Indian Tribes For Amusement And General Knowledge. Prepared From The General Conversation Of Herman Lehmann, Willie Lehmann, Mrs. Mina Keyser, Mrs. A. J. Buchmeyer And Others

Other works by JONATHAN H. JONES

First edition. 8vo. Original dark green cloth with blind-stamped front and rear covers, gold gilt vignette on front cover, with the word "Indianology," gold gilt titles on front cover and spine, 235 pp., frontispiece, preface, introductory, illustrated, credentials and testimonials. The gold gilt is the brightest that we have seen for this book. Herman Lehmann and his brother Willie were captured as young boys by the Apaches in 1870. Willie escaped and returned to his white community home, but Herman remained and became a warrior with the Apaches and later with the Comanches, and grew to be a hater of the whites. Lehmann tells the gruesome story of his captivity and his encounters in battles with whites, Mexicans, and soldiers, where he killed some of each. Eventually he was returned to his mother and re-entered white society. Basic Texas Books 124 says "One of the most remarkable accounts of life among hostile Texas Indians, this is also one of the few surviving accounts of life in 19th century Texas from the Indian point of view. A. C. Greene said "that of all the captive narratives, I believe the finest story is Herman Lehmann's." Professionally re-backed with the original spine laid down, front and rear endpapers replaced, else a very good to near fine copy of an elusive and desirable title, housed in a cloth clamshell case with a paper label on spine and the word "Indianology" stamped in black.

The Grey Fox. The True Story Of Bill …
MARK AND JOHN BOESSENECKER DUGAN

Vengeance Is Mine. The Scandalous Love Triangle That …
BILL NEAL