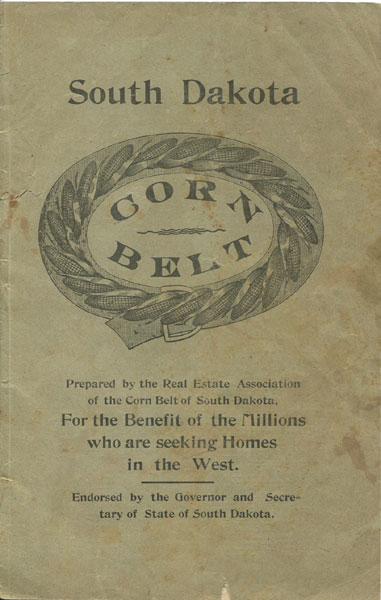 A Brief Description And A Few Testimonials Concerning The Corn Belt Of South Dakota. One Of The Most Productive And Healthful Countries In The United States.

First edition. 8vo. Printed wrappers, 32 pp., illustrated, maps, advertisements. This is the second year in which the Annual Corn Belt Exposition, in Mitchell, South Dakota, was held. A full-page picture of the original Corn-Belt Exposition building is shown. The Corn-Belt Exposition was later changed to the Corn Palace. This festival continues to be a celebrated event through and inclusive of this current year. This booklet was prepared by the Real Estate Association of the Corn Belt of South Dakota for the benefit of the millions who are seeking homes in the West. Endorsed by the Governor and Secretary of State of South Dakota, this booklet provides a brief description of South Dakota, including climate, value of the crops, soil, rainfall, corn, wheat, flax, oats, barley, hay and grasses, minor crops, potatoes and other vegetables, fruits, etc. The advertisements are of interest. Covers moderately soiled, light wear to spine ends and extremities, else very good copy.