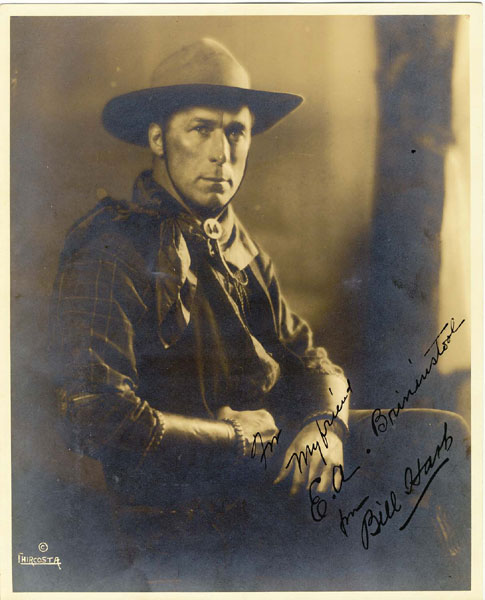 Other works by WILLIAM S. HART

Pictured in full-dress cowboy garb, with the inscription, "For my friend, E. A. Brininstool, from Bill Hart." Further inscribed in ink on the back of the photograph, "To my good old pard of Sagebrush Days, L. H. Spragle, E. A. Brininstool, June 18, 1919." William S. Hart was a famous Hollywood western movie star, beginning in the era of the silent film and into the early talking pictures. In his day, he was perhaps the most popular western star, his final major picture being TUMBLEWEEDS, in 1925. He wrote several young people's books and an autobiography. He died in 1946. E. A. Brininstool was a newspaperman and a student of western history. He published several books on Custer, Indian Wars, gunfighters, and unfair treatment of the Indians by the Government and the military. L. H. Spragle, lived in Pennsylvania and was a long-time friend of Brininstool. Fine photograph.