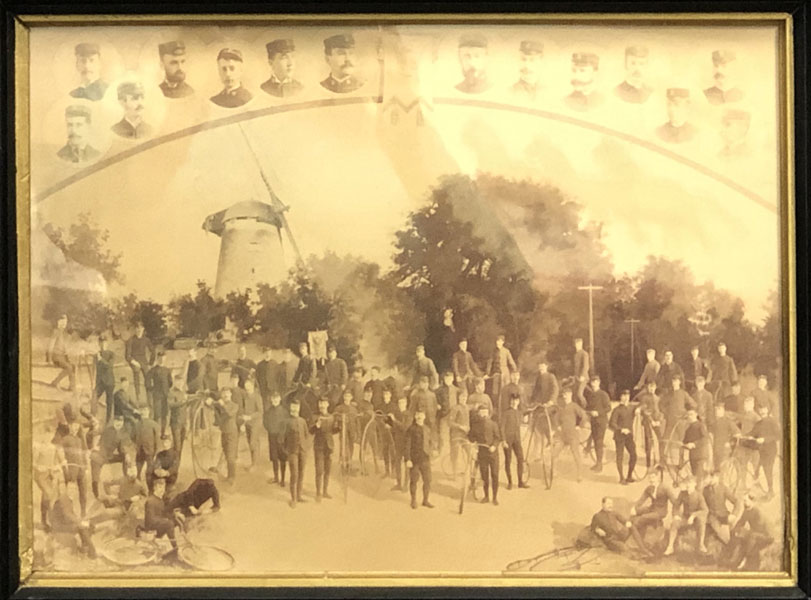 First edition. Large composite albumen photograph 13 3/4" x 18 1/2" in a contemporary black wooden frame 15" x 19 1/4." Image appears gently faded. This has not been examined out of the frame. Composite photograph of the Montreal Bicycle Club in 1892, with fourteen vignettes of the officers of the club at the head with Albert Thomas Lane listed as being President. According to OUTING; SPORT, ADVENTURE, TRAVEL, FICTION. VOLUME 18, 1891: "THE Montreal (Que) Bicycle Club lately elected the following officers; President, A. T. Lane; first vice, G. Kingan; second vice, H. Mackenzie; secretary, A. Harries; treasurer, W. S. Weldon; captain, Louis Rubenstein; first lieutenant, D. S. Louson; second lieutenant, F. E. Adams; committee, W. G. Ross, E. W. Barlow, D. S. Louson, J. E. Walsh," all of whom are depicted in the vignettes at the head of the photograph. On July 1, 1874, Albert Thomas Lane rode the first bicycle ever seen in North America through the streets of Montreal. It was a penny-farthing style of bicycle, also known as a high wheel or high wheeler. On December 2, 1878, Messrs C.J. Sidey and Horace S. Tibbs met to form a Bicycle Club in Monreal. Sidney had been president of the Edinburgh Amateur Bicycle Club so one might assume that MBC would simply be the offspring of the British Club System. Interestingly, minutes of the meeting between the two men stated that the two founding members should enroll "original members" who were to append their signatures to the draft Constitution. The first signature, and the only other one dated 1878, is that of Mr. A.T. LANE, added on December 9th ... one week after the initial meeting and was named co-founder. Lane was certainly not a disinterested party .... Lane was proprietor of Canada's main bicycle and tricycle import agency located in Montreal. He was the main Canadian agent of Premier Bicycles and Sparkbrook Bicycles of Coventry, England. Shortly after its formation, the MBC merged with the Montreal Lacrosse Club and the Montreal Snow Shoe Club to form the Montreal Amateur Athletic Association or MAAA. Many of the early cyclists were active or former military officers who adopted the only form of organization known to them, military order. Therefore, throughout the 1880s, the MBC was a paramilitary club that required its members to wear their uniforms at all time. This distinctive feature led to the club's efficiency and renown as Montrealers began to equate riders of the MBC with cycling itself. In the beginning, the club's growth was slow, partly due to the $18 cost of the uniform and the $100 to $200 cost of a bicycle. But cycling was quick to organize itself. The League of American Wheelman (LAW), the national administrative body in the US, was soon followed by the formation of the Canadian Wheelman's Association (CWA) in 1882. This is an early image of the Montreal Bicycle Club and the members are all shown in military-type uniforms. Image is by the noted Montreal photographer, William Notman. "William Notman was born in Paisley, Scotland, in 1826, and moved to Montreal in the summer of 1856.[1][2] An amateur photographer, he quickly established a flourishing professional photography studio on Bleury Street, a location close to Montreal's central commercial district. His first important commission was the documentation of the construction of the Victoria Bridge across the St. Lawrence River. The Bridge opened with great fanfare in 1860, attended by the Prince of Wales and Notman's camera. The gift to the Prince of a Maple Box containing Notman's photographs of the construction of the bridge and scenes of Canada East and Canada West so pleased Queen Victoria that, according to family tradition, she named him "Photographer to the Queen." The first Canadian photographer with an international reputation, Notman's status and business grew over the next three decades. He established branches throughout Canada and the United States, including seasonal branches at Yale and Harvard universities to cater to the student trade. Notman was also an active member of the Montreal artistic community, opening his studio for exhibitions by local painters; the studio also provided training for aspiring photographers and painters. Notman was highly regarded by his colleagues for his innovative photography, and held patents for some of the techniques he developed to recreate winter within the studio walls. He won medals at exhibitions in Montreal, London, Paris, and Australia." --- Wikipedia. With extensive research conducted by Malcolm McRae, re-founder of the Montreal Bicycle Club, he was able to determine not only the location at which the photograph was taken (Moulin Fleming in Lasalle) but he was also able to identify many of the people within the photo. Please see his website at Montrealbicycleclub dot weebly.com/1892-composite-photo dot html An attractive image of riders and their bicycles.

Narrative Of An Expedition Through The Upper Mississippi …
by Henry R. Schoolcraft

A New Route From Europe To The Interior …
Canada-North America