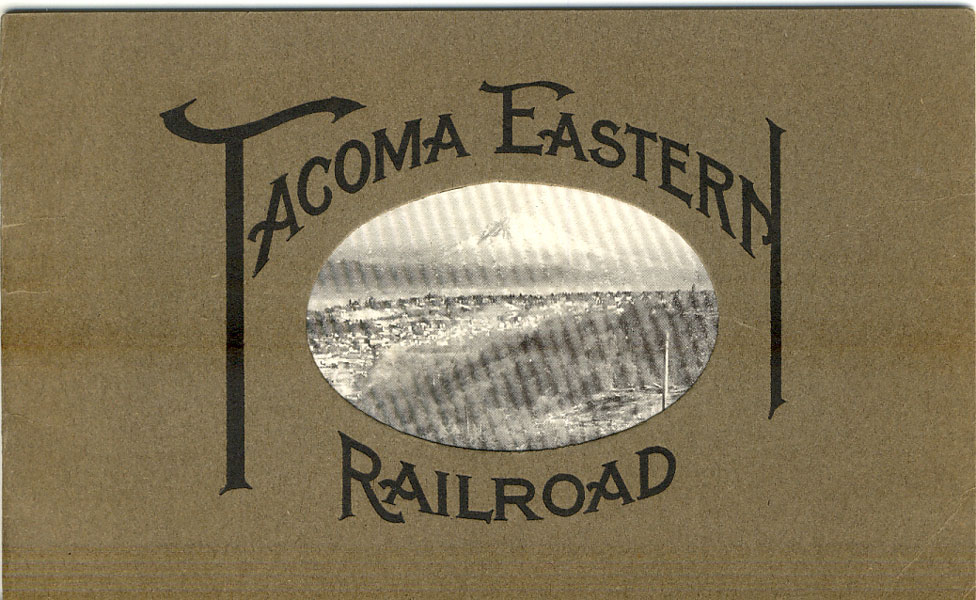 4-1/4" x 6-3/4" oblong wrappers with an oval cut-out showing a view of Mount Tacoma on the front wrapper. 28pp. including wrappers. Describes travel information on the Paradise Valley Route via the Tacoma Eastern Railroad. The Tacoma Eastern Railroad passes through a section of Washington's rich country that has vast natural resources such as lumbering and is western Washington's greatest source of wealth, huge forests of fir, cedar, spruce, hemlock and other valuable woods. The largest and finest specimens of the fir are to be found on the line of the Tacoma Eastern Railroad. It also passes through Pierce County which has numerous mineral springs and is second in the state in the amount of coal produced. Describes Tacoma as the chief seaport and exporting point on the North Pacific coast naming towns, lakes, creeks etc. along the way, such as Bismarck, Kapowsin, Clover Creek, Kapowsin Lake, Lake Head, Lake Ohop, Eatonville, Lover's Leap, Lynch Creek Falls, Success, La Grande et. al. The Tacoma Eastern Railroad is the only direct route to the Rainier National Park and Forest Reserve, an area of more than two million acres abounding in grand and awe-inspiring scenery, with Mount Tacoma known as the "King of the Mountains." Mount Tacoma is the greatest volcanic-glacial peak in the United States, rises in majestic grandeur to a height of 14,528 feet and is visible for more than one hundred miles in every direction. Briefly describes hotels at nearly every station. Information on the inside of the rear wrapper pertains to Requisites for Mountain Climbing. Numerous black and white photographs to include pictures of Nisqually River and Canyon as seen from the train, an electric light and power plant at Electron, Mineral Lake and Mount Tacoma, Paradise Valley, a crevasse in Cowlitz Glacier, Mount Tacoma, etc. Small crease to lower foredge of front wrapper. A very nice and informative copy.

Phoenix: Hotel Luhrs, In The Valley Of The …