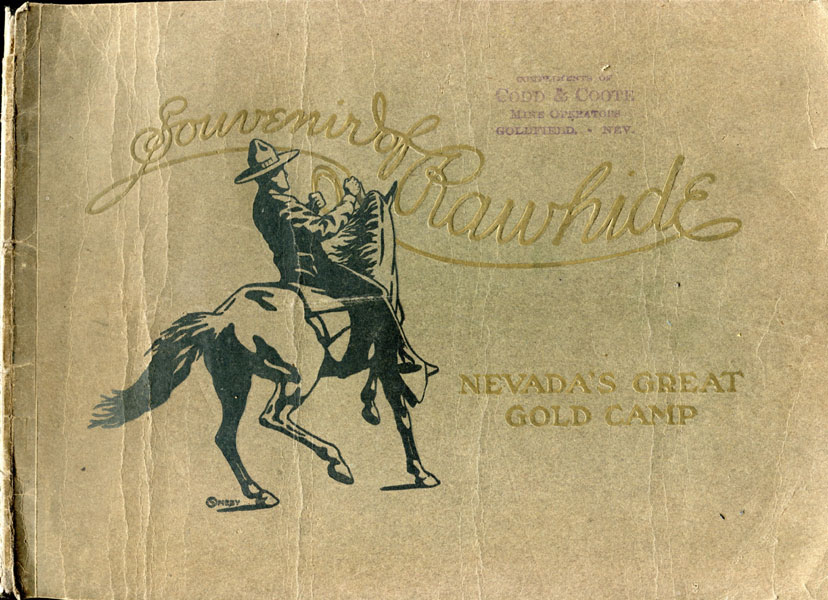 First edition. Photographs by N.E. Johnson. 7 3/4" x 10 1/2" in olive green pictorial wrappers with illustration of a cowboy in clack and with the title in gilt. [44]pp. Illustrations. Rawhide was at one time a mining town. Today, it is a ghost town. "I name you Rawhide," said Charles Holman, a cowboy from Wyoming, on February 15th, 1907. Little did he think when he said these words that he was christening the greatest and most phenomenal gold camp the world has ever known." History of the founding of and growth of Rawhide followed by a collection of black and white photographs. According to the history offered by Clark, Z.T. Carson located the first claim in the camp of Rawhide in February 1907. The first lease was to Charley Walker and Frank Clifford. Then, in August Eugene Grutt (known as the Daddy of Rawhide) bought an interest in the Mascott and Mascott No. 1. Initially there were only about 20 people in the camp. On September 23 R.M. Van Dorn organized the townsite under the name of Van Dorn Townsite Company, laying out the townsite and staking off the lots, which initially sold for $10 each. October 10th, the stampede to camp began and those lots increased in price to $1500 each. In a matter of 6 months, the town of Rawhide grew to a population of 10,000 people ... all boasting gold ... "Rawhide don't need any boosting, she's got the goods." According to Wikipedia, "Rawhide was a mining town that exemplifies many of the towns which sprang up in Nevada during the silver and gold rushes in the state's history. Rawhide was less a town born on the actual finding of large silver or gold deposits, and more on the manipulation of greed and desire for 'the next big thing.' That there was silver and gold in the hills surrounding Rawhide is indisputable, but the town itself existed more on promotion, self-serving aggrandizement, and showy displays by the promoters and developers of the town alluding to wealth and success that didn't exist relative to the size of the town. Fueling this was stock manipulation by unscrupulous mining stock brokers that funneled millions into the accounts of the manipulators, but provided little return on investment to the stockholders. There were riches to be made, and these schemers preyed on the common desire of investors of the time to get rich quick." "The publishers of this souvenir have no other object in view than to show the public at large, the marvelous growth of the camp from the time of its inception to the present day, and show the views of the principal properties of the camp ......" Photographs include camps, mining companies, people in the camps, miners, etc. Wrappers and pages soiled and worn, with closed tears to front wrapper edge and wear to spine with chipping at head and toe. First page loose. One page of a panoramic view laid in. Appears to be a portion of a photograph entitled, "Rawhide, Nevada taken from Hooligan Hill, featuring Crescent Peak, Silver King Hill, Last Chance Hill, Bluff Hill, Grutt Hill, Balloon Hill, and Murray Hill, 1908 April 15. Moderate wear and soiling throughout along with agent stamp to front wrapper and to title page .... Compliments of Codd & Coote, Mine Operators, Goldfield, Nevada. Research shows Codd and Coote as being mining stock brokers. Overall good. A wonderful collection of important mining history photographs.

Ghost Towns And How To Get To Them
by Betty Woods