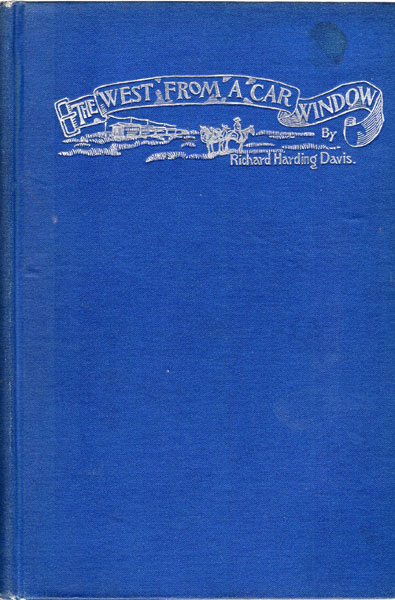 The West From A Car Window

First edition. 8vo in blue pictorial cloth blocked in silver. 243pp. Illustrations. 51 illustrations with 37 plates by Frederic Remington. Original blue pictorial cloth. Contents. Former owner's name place on front pastedown sheet. Light soiling to front board else fine. Chapters include "From San Antonio to Corpus Christi;" "Our Troops on the Border;" " Ranch Life in Texas; "The Heart of the Great Divide;" etc. "In January 1892, [Richard Harding Davis] boarded a train to begin a three-month tour of the West to write a series of articles for Harper's Weekly. This series was later published in a book, The West from a Car-Window. The West offered adventure, danger, and potential riches; and had captured the imagination of the country ... Readers will journey through Texas, from San Antonio to Corpus Christi; meet U.S. troops on the Texas/Mexican border; tour a mining camp, Oklahoma City, a Texas ranch, and an Indian reservation; experience an army post through civilian eyes; and for a finale, visit Denver and Colorado Springs in Colorado." Herd 656 says, "A chapter on Texas ranch life, mostly on the King Ranch."

Mimes And Miners: A Historical Study Of The ...
by Clair Eugene. Willson

The Chinese Dragon In Tombstone
by Ben T. Traywick