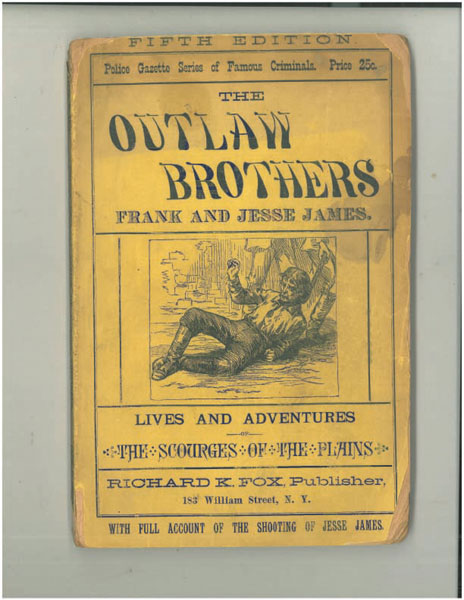 The Outlaw Brothers, Frank And Jesse James. Lives And Adventures Of The Scourges Of The Plains.

8vo. Pictorial yellow and black wrappers, [5], 67 pp. plus 7 pages of advertisements, frontispiece. Top of front panel says "Fifth Edition" and shows a picture of a hanged man, inside front cover and inside rear and back cover are advertisements. This is a rare item and we have only seen two other copies in the past years that state "Second Edition" at the top of the front cover. It has been said that this booklet was printed in a small quantity and as they sold and more were needed the publisher printed them as if sales were so good that another edition was needed. We don't know what actually was the reasoning, but this copy matches identically with all bibliographical sources. Divided into twelve chapters, this lurid chronicle begins with a visit to the James brothers in their Outlaw Retreat, followed by biographical sketches of the criminals; their activities with Quantrill’s guerrillas during the Civil War; their first bank robbery; train robberies; their time in Mexico, and numerous cold-blooded murders. The text ends with the Ford Brothers running down and assassinating Jesse. “Thus terminated the career of the most notorious bandit of America. His followers were dispersed, and his brother Frank was in retirement, where, no one seemed to know. Includes numerous wood-engravings of brawls, hangings, robberies, etc. Six Guns 542 says "Rare." "Another example of the Police Gazette's historically worthless outlaw series, which have now become rare collector's items." Light wear to the spine ends, and moderate wear to the edges, else a very good copy housed in a quarter leather and cloth clamshell case with raised bands on the spine and titles stamped in gold gilt on the spine.

Through Rates Of Fare From Council Bluffs And …
J. P. Mertlik [Compiler]

Marshal Of The Last Frontier. Life And Services …
by Zoe A. Tilghman