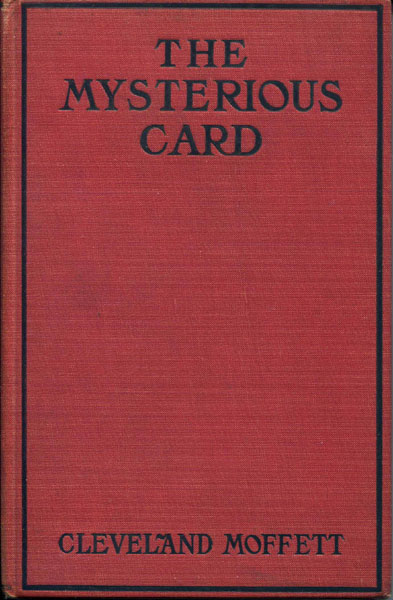 First edition. A few page edges lightly foxed, else fine bright copy lacking the unprinted glassine dust jacket. An exceptionally sharp copy with the solution to the mystery sealed, with seal unbroken. According to Queen's Quorum 12, this is without a doubt the second most famous literary puzzle after The Lady, Or The Tiger?. It first appeared in the magazine "The Black Cat" in February 1896; it was published in book form by Small, Maynard of Boston some time between 1896 and 1912...the exact year is unknown, even the Library of Congress having no date on record. According to Queen's Quorum 12: "The theme of the story is a sailor on leave finds a piece of paper with words written in a foreign language on it. Each time he asks various people for their help to translate the message, they refuse to help and furthermore either beat up, kick, or otherwise abuse the poor man. Later an archeologist agrees to help him with the translation with the promise that the sailor will suffer no further abuse. But before they meet something happens to forever add to the puzzle." After reading the book the story actually goes as follows: "a New Yorker in Paris, during intermission at the Folies Bergere is inconspicuously given a card by an attractive and charming woman as she passes by his table. The card bore some French words written in purple ink. Not knowing the language, he was unable to make out the meaning of the words on the card. He promptly returned to his hotel and asked the hotel manager to please translate the card's message. Upon reading the message the manager ordered the man from his hotel at once. At the next hotel he received the same response from the manager. The New Yorker relentlessly pursues others and in time he is ordered to leave France and never return again. Back in New York he sees the lady who gave him the card riding in a carriage and follows her to her hotel, where he learns that she will not see him until she grants him an appointment, which doesn't take place until some months later. At that time she is quite ill and before she can reveal the message to him, she dies, and at the same time the inked words on the card disappear!" The story ends with no clear resolution to the mystery. The events in The Mysterious Card Unveiled take place 11 years after the New Yorker returns home. It is a first-person account by a kind and scrupulous physician who is treating him for mental disorder and unspecific ailments. He is actually looking for someone to talk to, someone he can unburden himself on. A quick read as each story is nicely presented and about 43 pages per each tale.

Backfire; Story For The Screen.
by Raymond. Chandler

An African Millionaire. Episodes In The Life Of …
by Grant. Allen