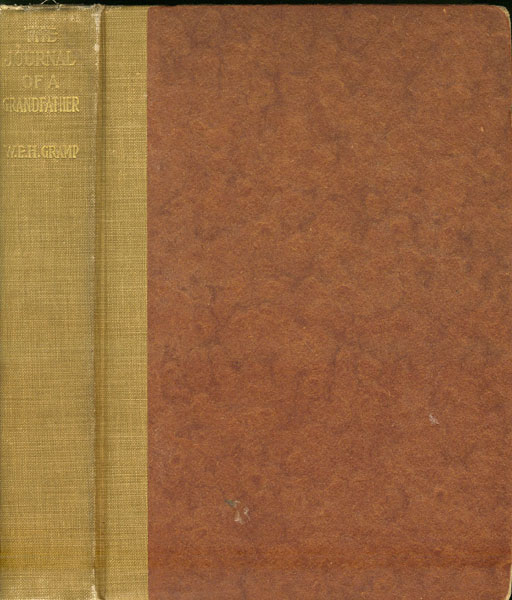 The Journal Of A Grandfather By W. E. H. Gramp

First edition. 8vo. The front fly leaf contains a full-page, inked presentation inscription to "General Frank D. Baldwin, the gallant soldier, good neighbor and dear old friend of the author, St. Louis, Nov. 14th, 1912." Two-tone cloth and batik boards, 239 pp., frontispiece (portrait of the author), illustrated, plates, portraits, teg. A very scarce and little known privately printed western memoir, loaded with both vivid and authentic personal narrative, and evidence of impending senility. Hughes served under McCollock in the Civil War, after which he settled in Young county, Texas. He gives an account of his experiences as a rancher, with mention of such pioneers as King, Kennedy, and Goodnight, descriptions of hunting trips in the west, and general reminiscences of life in Texas in the 1880's. A very scarce work, not in Adams Herd, and evidently unseen by Howes as he lists it under "Cramp." Dornbusch 1042 says "Hughes served in the 1st Texas artillery and as a Colonel of the 16th Confederate states cavalry." Minor wear to head of spine and corners, else a very good, clean, tight copy.

The First Cattle Ranch In Texas
by Anahuac, Texas The Progress

Lure Of The Land. Texas County Maps And …
Joe B. And Mike Cox Frantz [Edited By Roger A. Griffin]