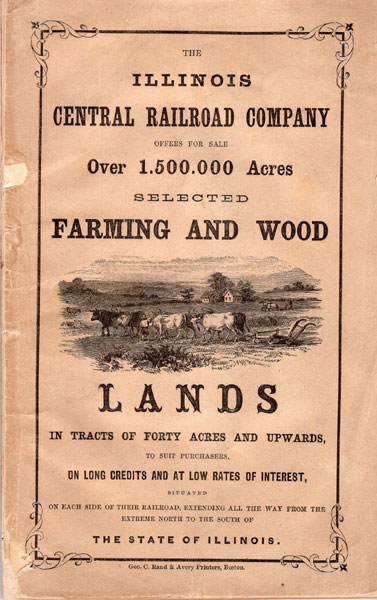 The Illinois Central Railroad Company Offers For Sale Over 1,500,00 Acres Selected Farming And Wood Lands In Tracts Of Forty Acres And Upwards, To Suit Purchasers, On Long Credits And At Low Rates Of Interest, Situated On Each Side Of Their Railroad, Extending All The Way From The Extreme North To The South Of The State Of Illinois

9" x 5-1/2" pictorial wrapper. 84pp. including wrappers. Two black and white maps. The first map is 9" x 5-1/2" and is entitled "OUTLINE MAP OF ILLINOIS." The second map covers 2 pages, 10-1/2" x 6-3/4" and is entitled "RAILWAY GUIDE TO THE ILLINOIS CENTRAL RAIL ROAD LANDS." Everything you would want to know about settling down in Illinois is in this booklet to include railroad routes, value of land for farming, value of crops, towns and villages, mechanical labor will continue to be in constant demand. The Company owns valuable tracts of iron and lead ores, also coal beds of immense richness. "Illinois Is now in the start of its great advance towards becoming the first producing State in the Union. Having Lake Michigan on one side, furnishing a constant outlet for its produce, the Mississippi to the west, with its tributaries, the Illinois and Rock Rivers, both navigable streams, running far into its interior, the Wabash on its eastern borders, and Ohio on the south, the natural facilities would seem unequaled in the world." Several letters from successful farmers telling of the advantages and prospects of Illinois. Other subjects discussed are the climate, soil, health, coal, Illinois Central Railroad Lands, the cost of opening a farm, the population, agriculture, statistics of towns et. al. The cove and first 2 pages are detached from spine, overall chipping else a booklet full of information. Good copy.

Salem: The Capital City Of Oregon. The Cherry …
by Salem Board Of Trade

Once Upon A Time In Sedona.
by William. Howard