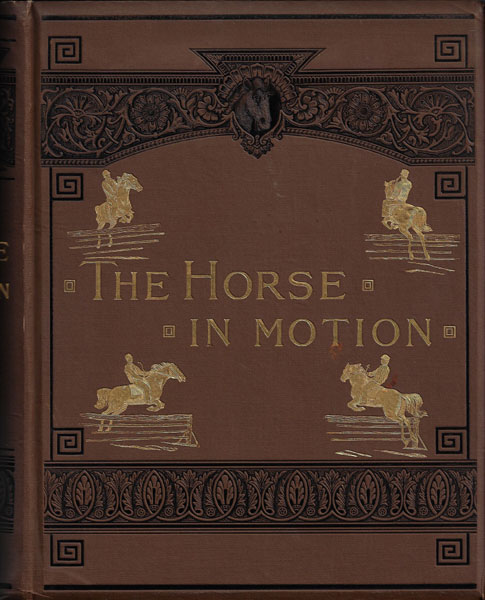 The Horse In Motion As Shown By Instantaneous Photography With A Study On Animal Mechanics Founded On Anatomy And The Revelations Of The Camera In Which Is Demonstrated The Theory Of Quadrupedal Locomotion. Executed And Published Under The Auspices Of Leland Stanford

First edition. Quarto. Original brown decorated cloth, titles and decorations stamped in gold gilt on the front cover and spine, dark brown front and rear endpapers, frontispiece, viii, 9 - 127 numbered pp., preface, introductory, illustrated, plates, colored drawings, top edge gilt, appendix. Science and technology were famously advanced by the $25,000 bet that Leland Stanford made with a friend as to whether a horse completely left the ground when running at full speed. In 1872, Stanford hired photographer Eadweard Muybridge to prove his assertion, but the equipment's limitations didn't allow him to do so until 1878. The illustrations in this book are based on those photographs. The photographic study of human and animal locomotion became Muybridge's life work, leading directly to the horse race photo-finish (thereby settling countless other bets), and, more importantly, to the development of the motion picture. In 1880, Muybridge created the first motion picture by running twelve pictures through a special projector. A near fine, bright, tight copy of a large and heavy book.

Rosettes, Ornaments And Metal Saddlery Specialties. Catalogue No. …
by The Enterprise Manufacturing Company

The Flavor Of Texas
by J. Frank Dobie

The Cornett-Whitley Gang. Violence Unleashed In Texas
by David Johnson