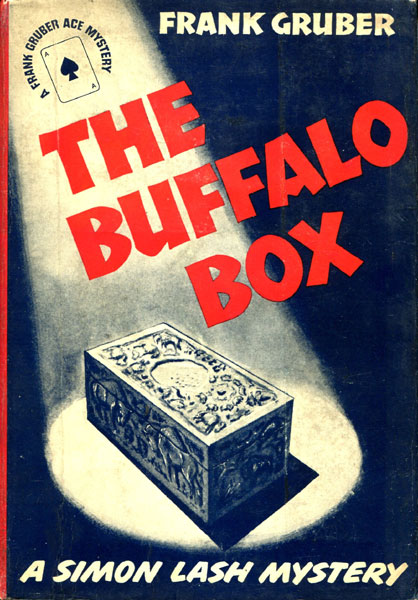 First edition. Second Simon Lash title. Light offsetting to front and rear pastedown sheets caused by bleeding of binder's glue, else a near fine in dust jacket with a faint vertical crease to the front cover and a miniscule chip to bottom edge of foot of spine. Gruber knows his pioneer history very well and uses this knowledge to bring us a fine mystery with the tragedy of the Donner Party as its basis. An old prospector turns up at book collector Simon Lash's office and claims to be Lansford Hastings, author of THE EMIGRANT'S ROUTE TO OREGON AND CALIFORNIA, and wants Lash to find the owner of a redwood box carved in an intricate design of buffaloes. Simon knows that Hastings was considered partly responsible for the Donner Party tragedy and also that he had died some seventy years previously. Lash isn't much impressed with Hastings until he learns that the buffalo box was carved by Isaac Eckert, a very wealthy member of the Donner Party who died in the snowbound pass. Later that same day an attractive female, who claims to be Eckert's descendant, tries to sell a copy of THE EMIGRANT'S ROUTE in a secondhand bookstore, Lash becomes more interested in spite of himself. A well-preserved World War II book complete with Gruber's patriotic war message on back panel of the dust jacket.

Fell Of Dark.
by Reginald. Hill

The Montanans.
Bill And Martin H. Greenberg Pronzini [Edited By]