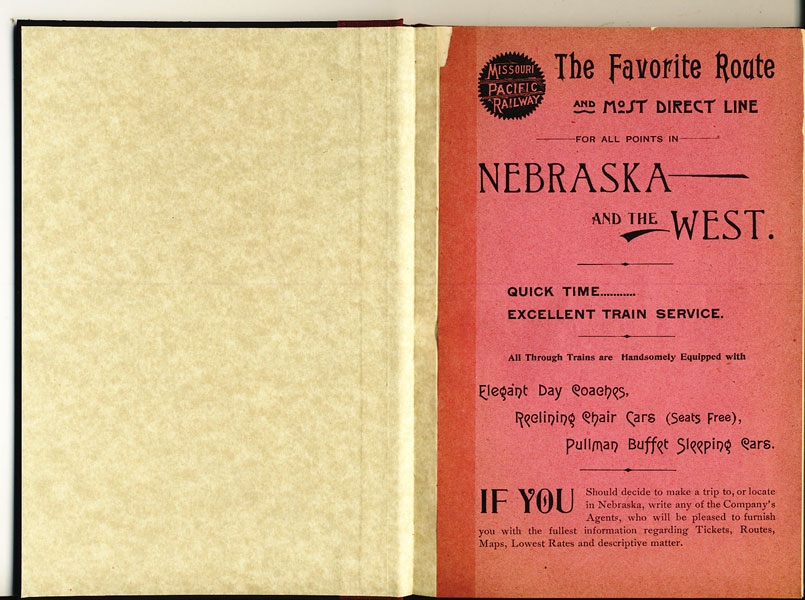 Statistics And Information Concerning The State Of Nebraska, Taken From State And National Reports, Showing The Advantages, And Giving Information For The Farmer, The Mechanic, The Laborer, The Merchant, The Manufacturer, Contemplating A Removal To One Of The Newer And Progressive Western States. With The Compliments Of The General Passenger Department Of The Missouri Pacific Railway

Second edition. 12mo. Stiff printed wrappers, bound into a quarter cloth and boards binder, 64 pp., illustrated, plates, tables, map. A promotional booklet published by the Missouri Pacific Railway to encourage settlement in Nebraska. Information is provided on the history of the state, climate, rainfall, lakes, springs, rivers of Nebraska, population, soil meteorology, churches and schools, grasses, crops, stock raising, sugar beet culture, horticulture, apple crop, poultry and eggs, dairy, tobacco, etc. Distances from Lincoln, Nebraska to any point in the state are provided. The altitudes for towns and cities are given. An interesting population map of Nebraska by counties is of interest. Large folded map of Nebraska affixed to rear cover is in fine condition. A rare railroad promotional housed in a cloth clam shell case with titles stamped in gold on the spine.

Horse Conformation As To Soundness-Performance-Ability. [And] Hoss Trades …
by Ben K. Green

The Divine Eccentric. Lola Montez And The Newspapers
by Doris Foley