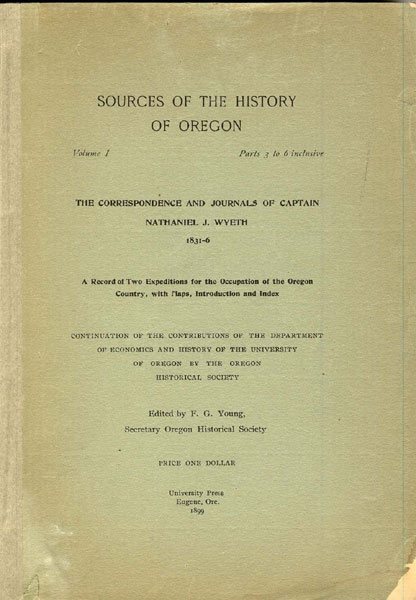 Sources Of The History Of Oregon. Volume 1, Parts 3 To 6 Inclusive. The Correspondence And Journals Of Captain Nathaniel J. Wyeth 1831-6. A Record Of Two Expeditions For The Occupation Of The Oregon Country, With Maps, Introduction And Index. Continuation Of The Contributions Of The Department Of Economics And History Of The University Of Oregon By The Oregon Historical Society

9 3/4" x 6 3/4" in gray-green printed wrappers. [i]-xix, [xx blank], [1]-262 pp., tribute, preface, contents, introduction, index, 2 folding maps. In the 1830s Capt Nathaniel J. Wyeth led two expeditions to the Northwest. In the early 1830s Wyeth became interested in the Northwest and planned an expedition with Hall J. Kelley. In 1832 he proceeded independently, traveling to Fort Vancouver. Two years later in 1834, he led another expedition, founding Fort Hall in present-day Idaho and Fort William in present-day Portland, Oregon. Unable to compete commercially against the Hudson's Bay Company, he sold both fur trading posts to them in 1837. This item contains the correspondence and journals which record the expeditions of Capt. Nathaniel J. Wyeth in the Oregon Country 1831-1836. "The only diary kept of the first large emigrant train to Oregon. Crawford was a member of Elijah White's party, and traveled with Meek and Hastings. This is the first separate printing of the narrative that was issued in 1863 as a government document." Howes 719 says, "Wyeth, with Sublette, led expeditions to Oregon, in 1832 and in 1834, and established Fort Hall." Water stained to bottom corner of rear pages and wrapper along with small chip to bottom corner of front wrapper, light browning, soiling and with wear to both wrappers. Very good.

Thirteen: Stories Of The Far West
by Forbes Heermans

The Oldest Supply Depot For Agents' Goods In …