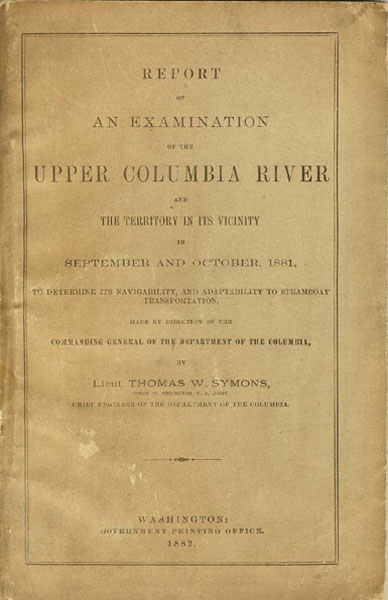 Report Of An Examination Of The Upper Columbia River And The Territory In Its Vicinity In September And October, 1881, To Determine Its Navigability, And Adaptability To Steamboat Transportation. Made By The Direction Of The Commanding General Of The Department Of The Columbia.

SYMONS, LIEUT THOMAS W. [ CHIEF ENGINEER OF THE DEPARTMENT OF THE COLUMBIA]

9" x 6 3/4" tan printed wrappers. 135 numbered pages, contents, map illustrations, map of Columbia River from the boundary to the Snake River (25 sheets at end of report. The sheets are numbered consecutively from the boundary to Snake River and can be joined together into one sheet which shows the river continuously.) Fold-out 16 1/4" x 13" skeleton map of the Upper Columbia from Department map, showing location of river sheets and ancient Lake Lewis attached to rear wrapper. In Examining the Upper Columbia River, Symons states, "I examined the river at the Little Dalles, Kettle Falls, and Grand Rapids, and traversed the river in a small boat from the last-named rapids, near the mouth of the Colville River, to the mouth of the Snake River, making as careful a survey as possible." "The report embraces a description of the portion of the river examined and the lands in its vicinity, and also of the other portions of the Upper Columbia and the country drained by it and its tributaries." "I have sought to show the economical relations of the Columbia to the surrounding country, and the importance of making that portion of it lying within the territory of the United States navigable as far as practicable, and have suggested a plan for doing so." Report discusses the Upper Columbia River above Grand Rapids, Grand Rapids to the Spokane River, Columbia River from the Spokane River to Lake Chelan, and Lake Chelan to Snake River. Chapter on the navigation of the Columbia River to include portions that are presently navigable, consideration for future improvements along with costs. Table of distances on the Columbia River. History and general description of the Columbia and its tributaries, geological history of the Cascade Mountains and the Columbia River, geographical nomenclature of the Columbia River region, etc. Wrappers soiled and with wear to the extremities along with chip missing from rear wrapper. Wrappers loose from chipped spine but still attached. Good. Maps clean and in very good plus condition.

Beyond The Third Rail, With Monte Ballough And …
DORIS B. OSTERWALD