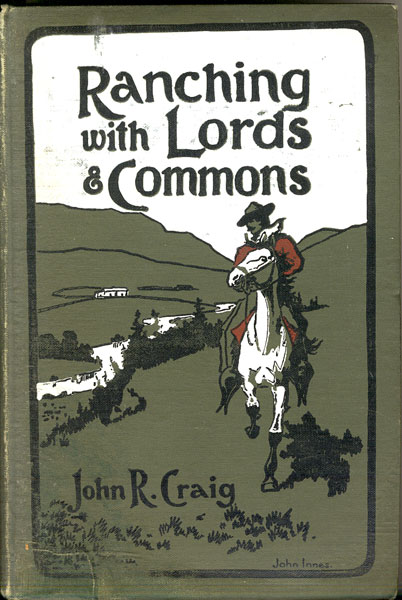 Ranching With Lords And Commons; Or Twenty Years On The Range. Being A Record Of Actual Facts And Conditions Relating To The Cattle Industry Of The Northwest Territories Of Canada; And Comprising The Extraordinary Story Of The Formation And Career Of A Great Cattle Company.

First edition. 8vo. Inked presentation inscription to Canadian Pacific Railway magnate Sir William "Billy" Van Horne "To Sir B. Van Horne with the compliments of the author. John R. Craig, Montreal, November 19th 1903." Pictorial cloth, vii [blank], 293 pp., preface, illustrated, plates, portraits, frontispiece. Six Score 25 says, "Craig was an American who became manager of the Oxley Ranch in the province of Alberta during the 1880s. The book recounts a classic example of absentee ownership [by the British lords and commons referred to in the title] and the subsequent mismanagement brought about by conflicts between Craig and the owners. This book and that by L.V. Kelly are the best two books on Canadian ranching. Craig was bitter about his experience and his narrative is one-sided. For the owner's side, see A. Staveley Hill's FROM HOME TO HOME." From the library of William "Billy" Van Horne, former President of the Canadian Pacific Railway. Van Horne was active in southern Alberta, completing the transcontinental railway and overseeing the construction of the Chateau Lake Louise in Alberta. Van Horne spent his later years in Montreal (where this book was inscribed), serving as a governor of McGill University from 1895 until his death. A wonderful association copy, inscribed to Van Horne in the year of publication, of an already scarce and important book on Canadian ranching. Top edges and fore-margins of most pages have a light, old water stain, cloth lightly rubbed, repair to cloth along the foot of spine, black & white coloring on the front cover is bright, as is spine panel, else an overall very good copy.

If The Prospect Pleases: The West The Guidebooks …
by Ladd Haystead